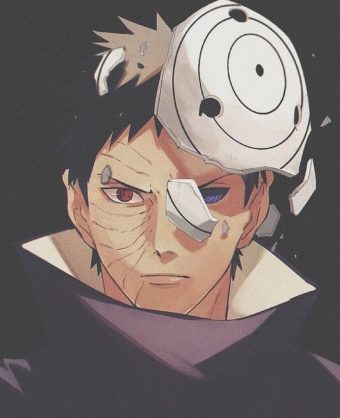 Obito Uchiha was a member of Konohagakure’s Uchiha clan. He was believed to have died during the Third Shinobi World War, his only surviving legacy being the Sharingan he gave to his teammate, Kakashi Hatake. In truth, Obito was saved from death and trained by Madara, but the events of the war left Obito disillusioned with reality, and he inherited Madara’s plan to create an ideal world.

Resurfacing under the names of Tobi and Madara Uchiha himself, Obito subtly took control of the Akatsuki, using them as a means to advance his machinations, eventually going public and starting the Fourth Shinobi World War. However, towards the war’s conclusion, Obito had a change of heart and, as atonement, sacrificed his life to save the same world he sought to replace.

Obito grew up not knowing who his parents were; in the anime, he was left in the care of his grandmother. Feeling alone in the world, Obito dreamed of becoming Hokage so that the people of the village would acknowledge his existence.

He enrolled in the Academy to help him achieve that goal, where he developed a one-sided rivalry with Kakashi, whose natural talent and popularity he was jealous of. He also became a close friend of Rin Nohara, whom he eventually fell in love with. After finally graduating some years later, Obito, Rin, and Kakashi were placed on a team under the leadership of Minato Namikaze.

As a genin, Obito’s abilities were average at best, struggling to match his classmates from the Academy. Determined to improve himself, he trained for several months at a time to eventually become a chūnin. Madara saw great potential in Obito and thus selected him as his disciple.

Madara’s hopes were proven correct, as under his tutelage, Obito dramatically improved his abilities as a late bloomer, with his skills leading to others questioning if he was Madara.

As a teenager Obito posed a threat to the Five Great Shinobi Countries, having taken control of the Fourth Mizukage and effectively Kirigakure, as well as posing a challenge to the Fourth Hokage and nearly destroying Konoha.

As an adult, he defeated Root’s most skilled ninja, and simultaneously held his own against Konoha’s top shinobi and Killer B. As the Ten-Tails Jinchūriki, Obito’s power exceeded that of even Hashirama Senju, he was able to effortlessly fight three powerful Hokage with ease, overwhelm both Naruto and Sasuke several times, and had the capability to destroy the entire Allied Shinobi Forces.

Also his powers include, Chakra and Physical Prowess, Body Modifications, Intelligence and more.

Because he grew up without knowing his parents, Obito’s childhood was marked by dreams of being acknowledged.

This motivated him to become a ninja so that he could, in turn, become Hokage and have the entire village finally recognise him.

When Rin acknowledged him regardless, Obito fell in love with her and aimed to earn her love in addition to the Hokage title.

But Kakashi’s presence, both in the classroom and later on their team, became a wall for Obito, because of Kakashi’s prodigy and that he had, without trying, gained Rin’s affections.

Though generally kind and of unwavering loyalty to his friends and allies, Obito nevertheless formed a one-sided rivalry with Kakashi. When not in competition with Kakashi, Obito would famously perform random good deeds around Konoha, especially for the elderly, which in turn made him notoriously late.

This combination of factors and Obito’s naturally just heart and optimism made him easy for Madara to exploit and ultimately corrupt.

Obito was born with black eyes and spiky, black hair. He wore a blue coat with an orange collar and trimmings that was closed by two buttons on the collar. A Uchiha clan crest was sewn on the back of his jacket, which had two buttons at the collar to keep it fastened. He also sported a white belt, ninja sandals, a standard Konoha dark blue forehead protector, and goggles with orange lenses connected to ear protectors.

After the events in Kusagakure, his right half of the face was horribly scarred, with deep wrinkles on it, while his damaged left torso and arm have been replaced by White Zetsu matter, which has a considerably lighter hue than his body. His hair grew longer throughout his rehabilitation and he would grow it out and chop it several times over the years.

Obito Uchiha, or Tobi when he was hiding his identity from the other members of the Akatsuki organization, possesses the Sharingan, the Rinnegan, and the power of the Ten-Tails.

This gives him a myriad of abilities including intangibility, mastery over the six elements of chakra, access to all of Nagato’s abilities, and the ability to destroy nearly anything with the Truth-Seeking Balls technique.

While he only possesses this form for a short time, it takes the entirety of the Allied Shinobi Forces to stop him in this state.

He was nearly invincible and if not for the efforts of a thousands-strong army and the scheming of Madara, he would have been unstoppable.