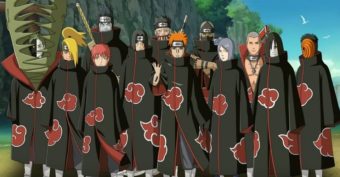 A good antagonist can add a lot of depth to a story. If a tale is only as good as its villains, it makes sense that the fantastic Naruto series has so many outstanding antagonists. While numerous opposing forces come and go throughout the narrative, one of the most continuing sinister collectives in the franchise is the enigmatic Akatsuki organization. The objectives of this organization vary depending on the storyline, but they are generally opposed to those of Naruto’s heroes.

The Akatsuki, like just about every other organization in Naruto, has a long and complicated history. It wasn’t always an evil organization, but it’s easy to see how it evolved into having very questionable ethics. Originally intended to prevent fighting nations from obliterating tiny settlements, the group became an adversary force after its leader came to believe that the only way to stop this devastation is to dominate humanity with overwhelming power. Many other antagonists have utilized the Akatsuki for their own ends, no doubt.

The Akatsuki, with its handful of members, is one of the most powerful organizations in Naruto. Its members can fight even the most skilled ninja and even overpower the exceedingly strong Tailed Beasts. The earlier generation, on the other hand, was significantly weaker than later participants. Despite this difference in strength, not every member of the team is as powerful as the others; certain members are nigh indestructible demigods, which isn’t surprising.

All Member of Akatsuki list, from strongest to weakest, is listed below.

At some point after the Sage of the Six Paths’ death, Madara Uchiha, who established the Akatsuki and wielded its power behind the scenes, gained all of Obito’s abilities to a far greater degree. He was able to develop the Rinne Sharingan by combining both eyes, which allowed him to defeat not just one but also all members of the Allied Shinobi Forces and resist their joint efforts to destroy him.

Madara’s only blunder was to let Black Zetsu influence his choices, as Kaguya, the all-powerful goddess, was able to enter and remodel his body according to her image. In a one-on-one altercation, Madara is without a doubt the Akatsuki’s most powerful member and perhaps the series’ most powerful character.

The Sharingan, Rinnegan, and ability of the Ten-Tails are all possessed by Obito Uchiha (also known as Tobi while hiding his identity from the other members of Akatsuki). This gives him a plethora of abilities, including intangibility, chakra mastery over the six elements, access to all of Nagato’s capabilities, and the ability to disintegrate virtually everything with the Truth-Seeking Balls technique.

He transforms into this form for only a few minutes at a time, but it takes the entirety of the Allied Shinobi Forces to stop him in this condition. He was nearly unstoppable if not for the efforts of a thousand-strong army and Madara’s conniving, and he would have dominated.

Nagato took the name Pain when he transformed the Akatsuki into a malevolent organization, thanks to the legendary Rinnegan that Madara spent decades developing. He employed his Rinnegan to control six corpses with distinct talents in order to achieve global domination as a method of attracting the world’s attention.

Nagato could instantly destroy entire cities by generating a huge force. He literally controlled the might of an entire army, and he was only stopped by Naruto’s usage of Sage Mode and the Nine-Tailed Demon Fox’s chakra. Because he was stronger than most members, Nagato had control over the Akatsuki’s strongest version.

Orochimaru is both one of the most self-interested characters in Naruto, and one of the most powerful. Orochimaru was once a member of the Akatsuki when it suited his interests, but he has confronted some of the series’ toughest fighters and learned from those encounters. After absorbing other people’s bodies, his body has been significantly modified, with many different abilities now in his possession.

He has a larger knowledge of ninjutsu than any other character in the series, and he is said to have more skills in his repertoire than is possible for a human being. Only someone with an superhuman degree of strength and desire to fight at their peak condition can approach Orochimaru when he’s at his peak condition and motivated enough to give it his all.

Itachi Uchiha is a master of the Sharingan’s most advanced skills, including Amaterasu’s inextinguishable flames, Tsukuyomi’s illusions, and Susanoo’s combat avatar. He’s also a skilled ninjutsu and genjutsu user who secretly observes the Akatsuki while acting as a member of it. He is an expert of the Sharingan’s most sophisticated techniques, such as Amaterasu’s inextinguishable flames and Tsukuyomi’ s hallucinations.

Kabuto isn’t a member of the Akatsuki, but he does serve as a spy for them and fights in their interests during the Fourth Shinobi World War. To defeat nearly any opponent in a direct confrontation, Kabuto grew powerful enough to use Orochimaru’s knowledge.

The dark Zetsu is an oddity that represents Kaguya Otsutsuki, the god-like Tsuchikage. As a result, he has access to a wide range of abilities and the ability to perform a plant ritual in order to resurrect his imprisoned queen. He can utilize every aspect of ninjutsu, as well as advanced Wood release and steal chakra from others. His body contains different ninja skills.

Although he is not a member of the Akatsuki nor an Uchiha, Shin Uchiha is a powerful adversary. During Boruto: Naruto Next Generations , he attempts to resurrect the Akatsuki since he believes violence will help humans progress.

Konan is a strong and cautious ninja who, as a founding member of the Akatsuki, is the only woman in its second generation. She’s an exceptionally powerful and cautious ninja, with her chakra being able to flow into paper for a number of creative assaults and even turn her body into paper pieces to flee quicker and avoid damage.

Another near-immortal and monstrous member of the Akatsuki is Kakuzu. He has the ability to utilize each form of chakra to its fullest potential, with his whole body formed of tentacles that he can employ as threads. This allows him to not only command anything he inserts the threads into but also fully recover from deadly injuries by replacing damaged organs with fresh ones.

Kisame Hoshigaki is one of the most capable members of the Akatsuki, with a somewhat hideous appearance and the power to back it up. Kisame’s strength is magnified even more when he employs Samehada, his living sword, in combat.

Deidara is a boisterous member of Akatsuki who specializes in large-scale devastation with explosives. Deidara creates moving explosives from normal clay by fusing earth and lighting elements, employing his many mouths for this purpose.

Sasori is the greatest puppeteer ninja in Naruto, and he’s practically indestructible. He has the ability to conjure an army of hundreds of humans-puppet hybrids who retain their skills, as well as several concealed weapons. Sasori is also resistant to all types of poisons because he has turned his own body into a puppet, and attacks that don’t dent his bodily core do not pose any real danger.

Yahiko, the original creator of the Akatsuki, is presumably a very talented and powerful ninja. Yahiko learned ninjutsu from the legendary Sannin Jiraiya and has the ability to lead an entire army of ninjas against established Hidden Rain Village authorities due to his fire, water, and wind nature affinities. To accomplish this, he would need a level of power and charisma that goes far beyond what most Ninja can manage.

Hidan isn’t really a strong ninja; he’s more of a tough guy. He has only two abilities, his unrivaled longevity and a technique that transforms him into a voodoo doll that harms anyone who attacks him while he’s in the proximity of a specific sign.

White Zetsu is an Akatsuki member with a unique genetic make-up that allows him to utilize a variety of advanced skills, as well as giving him a pale, plantlike appearance. He can use each basic nature transformation to the utmost potential, and he’s even capable of using sophisticated Wood Release abilities.

While not quite matching up to any of his canonical peers, Jūzō Biwa, as the anime-only member of the second generation of Akatsuki, has some amazing skills. He uses water abilities to strike down his opponents before ending them with the legendary Kubikiribocho blade.

Kouga is also one of the original Akatsuki’s mightiest ninjas, as he has exceptional speed, can utilize sword skills to overpower opponents, and can employ higher level nature transformation abilities to startle and petrify unsuspecting foes.

Daibutsu is another member of the original Akatsuki and, in fact, survived Madara Uchiha’s attack on the group. He attempted to combat Tobi and Zetsu before they had a chance to persuade Nagato to utilize the organization for their own gain, but he was unsuccessful.

Kie was a founding member of Akatsuki, when it was a guerilla group attempting to prevent more powerful countries from laying waste to the Hidden Rain Village. He isn’t particularly strong, however, it’s unknown what sort of talents he has.