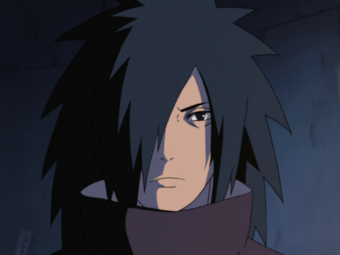 Madara Uchiha was the legendary leader of the Uchiha clan. He founded Konohagakure alongside his childhood friend and rival, Hashirama Senju, with the intention of beginning an era of peace. When the two couldn’t agree on how to achieve that peace, they fought for control of the village, a conflict which ended in Madara’s death.

However, Madara was resurrected and went into hiding to develop his own schemes. Unable to do so in his natural lifetime, he entrusted Obito with his teachings and plans shortly before dying.

Years later, after years of imprisonment, Madara would be revived only to have his ideas thwarted and ultimately accepting responsibility for the past before being finally killed.

Madara’s early years were a product of his era: the never-ending war made him a perfectionist who would never give up, and his victories on the field bolstered his self-assurance.

When one of these characteristics was attacked, as they frequently were by Hashirama, Madara’s competitive nature would emerge. Madara didn’t mind Hashirama’s influence in this area; he felt that the best way to succeed in the ninja world was to make friends with ones’ foes.

This, coupled with his position as the creator of the Rinnegan and provider of All Three Symbols, indicate that Hashirama’s legacy had a significant influence on Madara. The Uchiha “curse of hatred” did not afflict him to the same extent as Izuna was afflicted by it, and he even claimed to have broken off ties with Hashirama after Izuna died, yet Madara held onto their friendship unconsciously.

Madara’s goal was to protect Izuna, his only surviving brother. Madara was reasonable and compassionate as long as he had Izuna, ready to make concessions for a perceived greater good.

He was a light-skinned man with spiky, black hair that had a bluish tint to it. In his youth, his hair was chin-length and parted on the sides of his face. His regular attire included a blue long sleeve shirt and white pants. On the battlefront, he donned the standard Uchiha uniform: a black shirt with a high collar left slightly open and the clan’s crest on its back, as well as blue pants and bandages around his shins.

Around his waist was a white sash, which he had tied around his body to carry his ninja equipment. His sash was later replaced by a belt with pouches and various weapons attached. He also wore a third sash draped over his shoulders, which he used to keep his swords in place.

What are the Abilities of Madara Uchiha?

Madara was one of the most powerful shinobi in history, recognised as the strongest Uchiha in his lifetime and for decades after his death. A child prodigy, he killed several adult Senju before he had awakened his Sharingan.

History remembers him as the only one able to compete with Hashirama Senju, a “God of Shinobi”, and pushed him to his absolute limits. When Obito operated under Madara’s name, fear of Madara’s power forced the Five Great Shinobi Countries, and the neutral Land of Iron, to band together and trigger the Fourth Shinobi World War, as it was noted Madara’s name itself was power.

After his return from death and various enhancements, Madara was able to decisively defeat thousands of shinobi, the Five Kage, and the nine tailed beasts, all at one respectively.