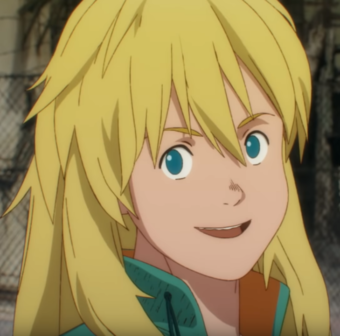 Nikaido is Kaiman’s companion, and they both hunt Magic Users. She is the owner of a restaurant called the Hungry Bug in the Hole. There she serves primarily gyozas with a few slices of shiso, which Kaiman adores. She is secretly a Magic User.

Nikaido is a young, attractive woman with long blond hair, blue eyes, an athletic body build, with a curvy figure (shown mostly after her Devil training).

At the beginning of the series, her clothes consisted of dark baggy pants and a black jacket with a Chinese design. About midway in the series, she wears green overalls with combat boots and leather gloves.

Nikaido has an easy-going and friendly attitude, though she keeps many of her worries and anxieties to herself. She is confident in her physical abilities and isn’t easily frightened.

She is one of the first characters of the manga, fighting Fujita while Kaiman “interrogates” Matsumura. She breaks the sorcerer’s finger and kicks him to the ground.

Fujita manages to escape through a Magic Door before Nikaido and Kaiman could get to him. Afterward, the pair decide to go back to her restaurant for food.

After running an errand to get roasted pork and passing through the Hospital was Kaiman is working, she finds a young man outside of her door asking for food.

She invites him in and is immediately assaulted as she discovers he is the sorcerer responsible for the recent attacks that have been partially turning people into bugs.

Later, Kaiman finds her in a similar partially transformed state and rushes her to the Hospital before setting off to hunt down and kill the sorcerer.

Upon his death, the transformation effects are undone, and Nikaido returns to normal.