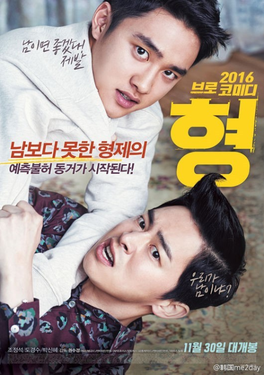 My Annoying Brother is a 2016 South Korean comedy drama film starring Jo Jung-suk, Do Kyung-soo and Park Shin-hye. It was released in South Korea by CJ Entertainment.

Doo-Sik (Cho Jung-Seok) is in jail for fraud. Doo-Young (Do Kyung-Soo), his younger stepbrother, is a promising judo athlete until an injury during a competitive match causes him to lose his eyesight. Doo-Sik appears before the parole board and advocates for his release on the basis of his stepbrother’s loss of vision. Doo-Sik is granted permission to go home on the condition that he takes care of Doo-Young for one year.

Doo-Young is a lonely old man who resides alone in his family’s mansion. His parents are both deceased. Doo-Young has withdrawn from the world since losing his eyesight. Soo-Hyun (Park Shin-Hye), his former judo coach, is the one who continues to keep contact with him. After 15 years, Doo-Sik shows up at home unexpectedly, and the two brothers attempt to reconcile.