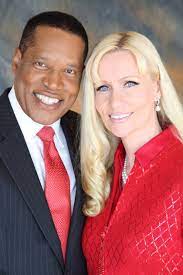 Alexandra Datig is Larry Elder’s wife. The conservative radio host will be a candidate in California’s upcoming recall election, and people want to know more about his personal life.

Who is Larry Elder and what is his net worth?

Elder is best known as a conservative talk radio host. He’s written, practiced law, and produced documentaries as well. Elder was born in Los Angeles, California, and is a Republican.

His career began in radio on KABC in Los Angeles in 1993, where his show The Larry Elder premiered. It was broadcast until 2008, when it was resurrected from 2010 to 2014.

Elder attended law school at the University of Michigan and practised for a few years before being recommended to George Green, KABC’s general manager, as a potential host by SRN host Dennis Prage. He has also written five books, including The Ten Things You Can’t Say In America; Double Standards: The Selective Outrage Of The Left; and Dear Father, Dear Son: Two Lives… Eight Hours.

According to Celebrity Net Worth, via The Sun, Elder’s lengthy profession in the media has given him a net worth of $16 million.

Elder has been running for office since July when he announced his candidacy to remove Democratic Gov. Gavin Newsom from office in California. On Wednesday, a court in California ruled that the conservative talk radio host may join the race.

In Sacramento, Elder prevailed in his challenge to a state election commission’s decision to keep him off the September recall ballot, according to The Independent.

Elder tweeted: “Victory! My next one will be on Sept 14 at the ballot box.”

He added: “This isn’t just a victory for me, but a victory for the people of California. And not just those who favour the recall and support me but all voters, including many who will come to know me.”

Who is Larry Elder’s wife?

Elder’s political opinions are no secret, and he has openly expressed his views on the campaign trail. Elder has kept his married life private, despite the fact that being open about one’s political beliefs is a requirement of his profession. According to news reports, Elder married Swiss actress and media personality Alexandra Datig in 2014 after years of friendship.

However, in 2015, reports emerged alleging that Elder and Datig had actually broken up. Since then, Elder has referred to his “girlfriend” on social media several times, but the description remained vague, leaving open the possibility that he was talking about Dating.

What is the Celine Dion TikTok trend and how can you do it?

Elder’s former fiancée, Datig, 51, has been seen on Tucker Carlson Tonight and in a History Channel documentary about cannabis. She has produced more than 100 episodes of the Larry Elder Show.

According to her biography on his wife’s website, Elder’s mother was born in Luzern, Switzerland, to an American father from a wealthy Hollywood family. According to her website, Datig’s father fought in the Second World War and was wounded during combat. Her mother was a Swiss-born high fashion model who grew up in Paris.

In 1986, Danig immigrated to the United States with her parents. She began her political career in 2001, when she worked for California State senator and Los Angeles city councilman Nate Holden. From 2002 until early 2004, she was a commentator for Fox News and other networks before becoming a journalist at The Washington Post.

She studied criminal justice and public relations at the University of North Carolina at Charlotte. She is editor in chief of Front Page Index, a political blog, according to her Twitter biography.

In May 2017, then-president Trump retweeted five Front Page Index stories. Datig was previously unmarried and had no children before marrying Elder.