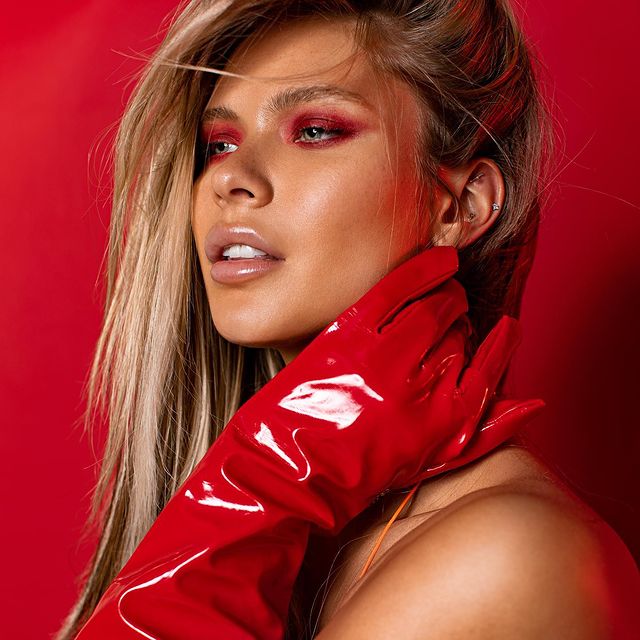 Josie Canseco freed the nipple when she swung by the West Hollywood nightspot Delilah this Thursday on the arm of her father Jose Canseco.

The blonde model, who has followed in her mother’s footsteps to pose for Playboy, was about to ring in her 25th birthday.

She flashed the flesh in a see-through netted top with no bra as she walked arm in arm with her father, a former baseball star and steroid icon.

At one point YouTube star Tana Mongeau could also be spotted behind Josie apparently joining in the festivities.

Josie, who once dated Brody Jenner, teamed her sensational blouse with a saucy black miniskirt and accessorized with tiny hoop earrings and a choker.

She threw a blazer fashionably over her shoulders and sharpened her supermodel features with makeup for her night on the town.

Evidently she has mended fences with her father after they appeared to have a spat near the beginning of this year.

Jose struck up a Twitter feud with Josie’s then recent ex Logan Paul – plus his brother Jake Paul – and she became so fed up she blocked her father on the platform.

Appearing on the Between Good And Evil podcast in January she said her father’s ‘fing rampage’ was ‘selfishly embarrassing,’ revealing he was ‘blocked right now’ and that she ‘ripped him a new a***’ over his outbursts.

Josie became Playmate Of The Month in 2016 – a little over a decade after her mother Jessica covered Playboy in 2005.

Jose was was married to Jessica from 1996 to 1999 after meeting her when she was a Hooters waitress in Cleveland.

Jessica hit the headlines again last year when Jose sensationally accused her of having an affair with Alex Rodriguez during his engagement to Jennifer Lopez.

Although Jessica steadfastly denied the allegation Jose stuck to his guns, challenging both her and A-Rod to take polygraph tests.

J-Rod, as the couple were affectionately known, eventually broke up early this year amid a swirl of rumors he had been cheating on her.

Who is Josie Canseco?

Next Model Management signee whose work has been featured in Love Magazine, Teen Vogue, Aeropostale and Urban Outfitters. She also appeared on the web series Summer Break.

She is from the town of Weston, Florida and later moved to Los Angeles, California.

She is the daughter of Jose and Jessica Canseco. She has appeared on her mother’s reality show, Hollywood Exes. She dated Logan Paul in 2020.

Some Facts about Josie Canseco

Her mother starred on Hollywood Exes alongside Mayte Garcia.

She was booked for a DUI in March of 2015. She auditioned to be a part of the Sports Illustrated 2016 swimsuit edition.

She is from the town of Weston, Florida and later moved to Los Angeles, California.