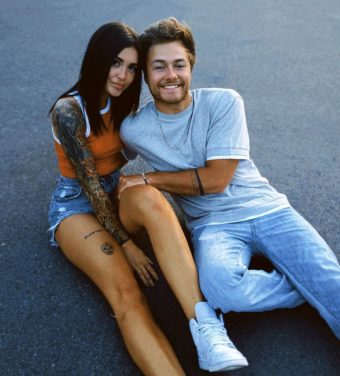 Peyton Meyer has married Taela LaCour in a private wedding ceremony following their engagement. The Girl Meets World star announced his marriage on Instagram, as well as the fact that he and Taela are expecting their first child together. He said that after meeting Taela, he “hated” the concept of getting married but “changed [his] mind.” The actor added that Taela “changed [his] life,” and he is “thankful” for a tiny family with her.

“I’m so grateful for our little family, it has changed my life forever,” actor Peyton Meyer, 22, wrote alongside a picture gallery on Instagram containing wedding photos and a sonogram image.

Peyton Meyer is sharing a double dose of exciting news!

The He’s All That star, 22, posted a gallery of wedding pictures to Instagram on Monday, sharing that he recently tied the knot with his singer-songwriter girlfriend Taela.

What’s more, the last image revealed that the pair are expecting their first child together, as it showed an image of a sonogram.

“Alright I have to get sappy with you for a minute,” Peyton wrote in the caption to the wedding pictures captured by photographer Kurt Ozan. “I had 100 million reasons to never get married. I always hated the concept of marriage. But all I needed was one reason to conquer all those reasons… And that one was you.”

“I’m so grateful for our little family, it has changed my life forever. You changed me forever,” he continued. “I love you.”

And in a nod to his upcoming duties as a new father, he added, “(To all the dads out there please send ya boy some tips)”.

Taela, 24, shared the same images to her own Instagram, and included a loving caption as well.

“Thank you for showing me the kind of love that i thought only existed in fairytales. thank you for constantly reminding me of my worth and for making me feel like the most important, beautiful woman in the world,” the musician, born Taylor Mae LaCour, wrote.

Peyton Meyer is an American actor. He is known for his role as Lucas Friar on the Disney Channel television series Girl Meets World, and his earlier recurring role as Wes Manning on Disney Channel’s Dog with a Blog.