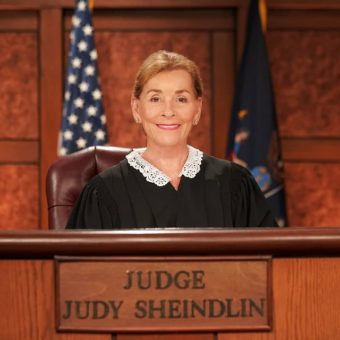 Judith Sheindlin held court in a new interview about how she became one of the highest-paid personalities on television and earned a $460 fortune.

As the star of Judge Judy she was eventually paid a whopping $47 million a year, which along with other earnings made her the top-earning TV host on the planet in 2018 according to a Forbes estimate.

And covering the new issue of People magazine she said: ‘You have to make yourself indispensable – and that is irrespective of what you do.’

An expert at trial testified that Sheindlin’s salary was significantly higher than other television personalities, including David Letterman, Jay Leno, and Conan O’Brien, who all received no more than $28 million annually at the time Sheindlin was making $47 million.

Judy explained: ‘Once you’ve done that and have leverage, make a reasonable demand and know what the commodity is worth.’

The hard-nosed attitude that has made her beloved to fans all over the country has translated into her business practices as well.

Rather than negotiating a salary she would simply sit across from the brass and give them a sealed envelope containing her demands.

In a recent legal battle involving her salary she testified she would inform her bosses what she wanted and would have left CBS if she did not get it, per Bloomberg Law.

About 10 years into Judge Judy, which began in 1996, told CBS: ‘We should be partners. I can do this program without you. Good luck, you can’t do it without me.’

Judge Judy started life after she was profiled by the New York Times and 60 Minutes, bringing her to the attention of television executives.

At that point she had modest aims: ‘I was hoping we would have a three- or four-year run and that my husband and I would be able to afford a two-bedroom apartment one block off the beach in Florida as a retirement place.’

Her husband Jerry Sheindlin was also a judge and as Judy described their life: ‘We were civil servants. We had five kids that were all educated, most went to graduate school. We tried to see to it they weren’t burdened with a lot of debt.’

Judy got her start as a prosecutor in family court in New York in the early 1970s, working her way up to a judgeship in the same field the following decade.

‘The majority of my life, I spent buying on the sale rack,’ she told People, saying she ‘couldn’t afford’ such extravagances as trips to Saks and Bergdorf’s.

She once told Norm MacDonald on his Netflix talk show that ‘I actually believe that in order to be a family court judge, where you touch so many different issues involving family, you should have a family.’

Over the summer Judy won a victory in a long-running legal tussle involving her 2009 salary increase to $47 million at CBS.

An appellate court in California ruled in July that CBS were acting within the terms of their contract by regarding her salary as a production expense, per Bloomberg Law.

Judy had been locked in a legal battle with Rebel Entertainment Partners and Richard Lawrence, the talent agent who negotiated her show’s original packaging deal.

Rebel are Richard’s successor in interest and were contractually entitled to 5% of the ‘defined proceeds’ from the show as a result.