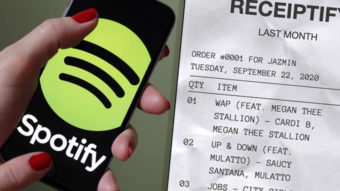 Receiptify is a website that converts a user’s Spotify plays into a receipt style and is easy to share on social media, inspired by Melody You’s Album Receipts. In recent days, the Herokuapp-hosted Top Track Generator has increased in popularity. What can you do with Receiptify on Spotify?

What is Receiptify for Spotify?

Receiptify generates lists of listeners’ top tracks and converts them into a satisfyingly realistic and neat till receipt format.

Users can choose from three time periods: favourite tracks of all time, from the last six months, and from just the previous month.

It therefore allows people to compare their listening habits over different time periods, as well as with others’.

How did Liu react to the plug-in’s instant success?

More than a million people used Receiptify within the first 24 hours after it launched.

Despite only sharing it to her “20 or so Twitter followers”, Liu woke up the following morning with “thousands of retweets”.

She said: “It was definitely really cool to see and I’ve met a lot of awesome people through this experience.”

She has since coded the plug-in to work with Apple Music.

She had the idea after seeing the @albumreceipts Instagram page, which reformats album track lists so they appear as receipts.

“I started at around 8am the morning before it was due and finished it at around 10pm, with a few food and TikTok breaks in between”, she told The Tartan in an interview in February 2021.

“I think my favourite part of the process is being able to be creative and bring my ideas into real life through code.”

How does Receiptify work?

Hosted by Herokuapp, Receiptify requires users’ Spotify log-in details. It then integrates with your Spotify account and generates a graphic that looks like a till receipt, with tracks listed in order of listens during the specified time period.

Instead of a monetary value, however, each track is accompanied by a duration in minutes and seconds.

Recently, the plug-in has resurfaced on Twitter, with users sharing their latest receipts with requests to rate and compare.