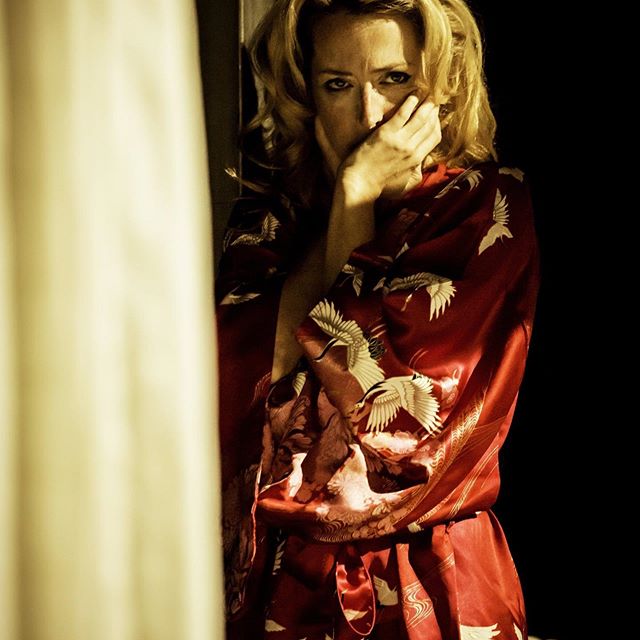 Form dreamy Hollywood romance, to a public breakup, here is the complete timeline of Gillian Anderson’s boyfriend, dating, husband, children, relationship and her love story. Gillian Leigh Anderson, OBE is an American-British actress. She began her career on FOX’s The X-Files as Agent Dana Scully. Her subsequent work on The Fall, Hannibal, American Gods, Sex Education, and The Crown, all prove the actress only gets more beautiful and talented as she ages. Her collection includes work by artists such as Diane Arbus, Helen Levitt, Cindy Sherman, Francesco Clemente, Alexis Rockman and Kiki Smith. Anderson enjoys architecture and interior design and she periodically works on floor and house planning projects. She has also expressed a desire to pursue mixed media ventures in the future.

Gillian Anderson Husband And Her Daughter

On set, Gillian met Clyde Klotz, the series assistant art director at the time. “It wasn’t quite love at first sight,” Gillian says of their three-month affair. “It was Clyde’s smile that first attracted me. He was very quiet, rugged and cool, but I soon realized he had a lot to say and that he was a very intelligent man.” On New Year’s Day of 1994, Gillian and Clyde flew to Hawaii and got married on the 17th hole of a golf course. The only other person present was the Buddhist Monk that performed the ceremony. “We sent a letter to my Mum and Dad, with a strict instruction not to open it until New Year’s Day. Mum had already met Clyde and my Dad was in a good mood that day, so they were happy.”

Gillian was back on the set of “The X-Files” two days later. A few months later came the news that she was pregnant. She already knew what she wanted to do, but conceded to “not completely thinking ahead about the consequences of that decision.” The first person she told on the set was co-star David Duchovny.

Her pregnancy came as shocking news to the Fox executives but Chris Carter once again stuck by Gillian and refused to have Scully recast. “Part of the show’s success is the audience’s investment in these characters,” he said.

Gillian said, “It was a bit of a bombshell for them [the Fox executives]. It wasn’t in my contract not to get pregnant, but it is now.”

Chris Carter then created an alien abduction storyline that kept Gillian off-camera long enough for labor, delivery, and a 10-day maternity leave. “My feet were swelling and I was exhausted, sleeping between scenes,” Gillian remembers. Her daughter, Piper, was born on September 25, 1994. Gillian had to undergo an unexpected cesarean section that required her to spend the next six days in the hospital. Four days later, Gillian was back on set shooting scenes for the episode “One Breath.”

Of the experience, Gillian said, “During the first season, I didn’t know who the hell I was, let alone who this character was. I feel stronger as a person in the world now. I remember, after going through the birthing process, feeling that no cut, no abrasions, no knock on the head will make me whine again.”

The proud new Mom happily declared, “I can’t imagine not having Piper.” She chose Chris Carter to be her daughter’s godfather. But sadly, Anderson and Klotz divorced two years later, in 1997.

Later in 2004, Anderson’s tied knot with her next husband who was to a producer named, Julian Ozanne. After the two years of romantic dating and married life, the couple broke up a years afterward, in 2006.

Then, she dated Mark Griffiths and tied knot with him in 2006, who fathered Anderson’s two sons, but the actress split with Griffiths in 2012. Since 2016, Anderson has been attached to Peter Morgan, a writer and producer known for his work on ‘The Crown’.

According to showbiz cheatsheet.com, Anderson and her co-star on The X-Files, David Duchovny, nailed “will-they-won’t-they” chemistry onscreen. However, both actors have confirmed they didn’t get along so well offscreen. As Variety reported: “Duchovny and Anderson weren’t always so easygoing on set, and they presented about as far from a united front as two co-leads could.”

Anderson revealed to the Daily Mail that there were times while filming The X-Files that she and Duchovny “were barely on speaking terms.” But the two actors friendship has grown over the years. They further said, “Whatever rapport we have as actors, we earned. It’s nice to be able to play that without ever even feeling like you’re playing it. David and I love each other, we get along well and we respect each other”, the sources reported. Further she also claimed, “she had never been romantically involved with Duchovny.”

Anderson was dating Peter Morgan. Morgan has a long career in screenwriting behind him especially successful are his period pieces. Anderson keeps things pretty close to the chest when it comes to her dating life. She politely declines to give details of her relationship with her boyfriend, The Crown writer Peter Morgan. She said, “I’m not skeptical about love”.

Recently, she has explained why she doesn’t live with her partner partner Peter saying it would be the “end” of their relationship if they cohabited. In Aug 2019, it was reported that couples who live together but are not married are the fastest-growing family type in the UK.

“I am an actively heterosexual woman who celebrates however people want to express their sexuality.”

“To me a relationship is about loving another human being; their gender is irrelevant.”

Anderson identifies as a feminist. In an August 2014 interview with Glamour magazine, Anderson said:

“I have feminist bones and when I hear things or see people react to women in certain ways I have very little tolerance.”[106] Anderson has several tattoos; all of them, as she described, are in some way about “peace of mind, right mind, right action”.