Why is Elmo trending and what’s his beef with Rocco the rock? 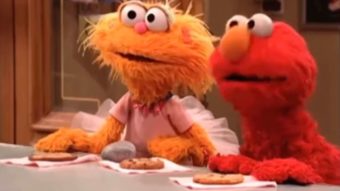 So, it’s 2022, and Elmo is the first celebrity to go viral on Twitter. This is how we live in the world today. People are uploading video clips of the legendary Sesame Street puppet, particularly recalling his eternal rivalry with Rocco the rock.

Why has Elmo reared his ugly, big red furry head again, and why does he despise Rocco (an inanimate object) so much?

Why is Elmo trending?

As a result, it appears that the practice began when The Tonight Show posted a 2015 flashback video in which Elmo teaches Jimmy Fallon how to cook a burger.

This seemed to inspire the masses to share their favourite Elmo clips, most notably one where Elmo loses his shit because of a rock called Rocco.

Elmo is furious with the Rocco, who has been given an oatmeal cookie that he really wants to lock his teeth around. Elmo seems to overlook the fact that because he’s a puppet, he has the same capacity as the rock to eat the cookie: none.

Elmo shouts: “How is Rocco going to eat that cookie, Zoe?! Tell Elmo! Rocco doesn’t even have a mouth! Rocco’s just a rock! Rocco’s not alive!”

So, I hear you ask, who the fuck is Rocco and why is a denying Elmo his tasty snack?

Rocco debuted on Sesame Street as Zoe’s pet in 1999, according to Know Your Meme. Elmo’s hatred of the rock grew over time.