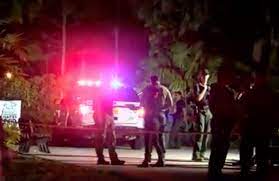 Chilling new body camera video has been released from authorities who responded to a tiger attacking a man at a Florida zoo.

The Collier County Sheriff’s Office said River Rosenquist, 26, was seriously injured Wednesday evening when he entered an unauthorized area near the tiger’s enclosure at Naples Zoo at Caribbean Gardens. Rosenquist survived, but the Malayan tiger was shot and killed by a sheriff’s deputy.

The man works for a third-party cleaning service contracted to clean restrooms and the gift shop, the sheriff’s office said.

Body camera video captures the frantic moments when a deputy approaches Rosenquist, who is heard screaming in anguish as the tiger bites his arm. Here’s everything that we know.

What Happened At Naples Zoo?

According to unconfirmed reports, a man employed by a third-party cleaning service entered an unauthorized region near the Malayan tiger’s enclosure at Naples Zoo.

It was reported that the individual was hired to clean restrooms and the gift shop, but not animal enclosures. After he went through a barrier fence, it is thought that Eko, an 8-year-old tiger, grabbed his arm.

The victim, a 26-year-old man, survived the attack and was taken to a hospital in Fort Myers. However, owing to concerns for public safety, the tiger had to be killed. After being shot, the tiger retreated back into its cage. The deputy then flew a drone over the scene to discover that Eko was unresponsive; authorities later administered anaesthesia.

On September 22, the Naples Zoo abruptly closed after a lion escaped and attacked a visitor. There have been no prior incidents at the Eko animal park, according to Courtney Jolly of the Naples Zoo.

In recent news, the Collier County Sheriff’s Office has made public bodycam video from the night of the tiger attack.

Please be advised that the video contains sensitive material, which may be disturbing to some viewers.

A deputy approaches the man, who still has his arm in the tiger enclosure, and a video recording is made. The clip may be viewed here.

Following the death of a Siberian tiger at Naples Zoo, the sheriff’s department has released a statement:

“The deputy initially tried to get the tiger to release the arm but he was left with no option but to shoot the animal in order to save Rosenquist’s life.

“Preliminary information indicates that the man was either petting or feeding the animal, both of which are unauthorized and dangerous activities.

“Our deputy did everything he could do in that situation and he ultimately made the only possible decision he could in order to save this man’s life. This was a tragic encounter at our world-class zoo facility. We value our community partnership with the Naples Zoo and their focus on conservation and education.”

WATCH: AOC takes part in one hot chip challenge amid the festive season