Who is Mia Thornton, RHOP star who called out Nicki Minaj? 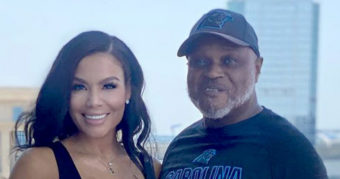 Mia Thornton slammed Nicki Minaj for not providing her son with the Christmas presents that the rest of the RHOP cast’s kids received, as well as other comments she made.

Nicki Minaj responded to the allegation and clarified that it was a misunderstanding, prompting her for an address. Nicki even requested for Mia’s home address so she could send gifts for her child. If you’re unfamiliar with Mia and the rapper’s past relationship, here’s everything you need to know.

Who Is Mia Thornton?

Mia is a well-known reality star, having appeared on The Real Housewives of Potomac. She joined the cast of Season 6 as a new addition.

But there’s more to Mia than her gossipy reputation. According to her Instagram profile, she is the Multi Clinic Franchise Owner of The Joint Chiropractic. Mia also owns a Gift Shop called AMILLEON LONDON.

We don’t know her age, but she has two children with Gordon Thornton and step-grandchildren through her spouse.

“Gordon is 32 years older than I and we do have grandbabies. We have four beautiful grandbabies,” she told E!.

Mia’s Instagram stories don’t contain any of her past comments in which she criticized Nicki for the present. She is said to have posted a video in which she discussed her co-stars’ kids receiving Gucci wallets and designer purses as gifts from the musician, while her 13-year-old received nothing.

After the incident, Nicki addressed these allegations on Twitter and clarified that she was unable to locate Mia’s address, therefore the gift for her son could not be delivered. The performer even offered to provide receipts as evidence. “I don’t play like that with kids. Please send me the address, mama,” the rapper tweeted.

In one of her replies, Mia apologized to Nicki, stating, “My queen. I apologize sincerely.”