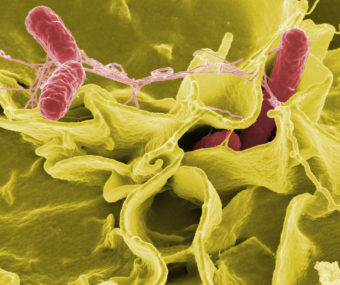 The states include California, Illinois, New Jersey, New York, North Carolina, Pennsylvania and Texas. A salmonella outbreak that has sickened more than 600 people in 37 states has been linked to various types of imported onions, federal health officials said Wednesday.

“Throw away any unlabeled onions at home. Do not eat, sell, or serve red, white, or yellow onions imported from Mexico and distributed U.S.-wide by ProSource Inc,” the US Centers for Disease Control and Prevention (CDC) warned in a tweet.

The CDC said 652 people have been infected with salmonella — and there have been 129 hospitalizations. No deaths have been reported.

“Epidemiologic and traceback data show that one source of infections in this outbreak are whole red, white, and yellow onions imported from Chihuahua, Mexico, and distributed throughout the United States by ProSource Inc,” the CDC said in a statement.

Multiple people who contracted salmonella ate onions at the same restaurant, according to epidemiological interviews conducted by the CDC.

The number of people sick with this salmonella outbreak is likely higher than reported, and it’s possible the outbreak isn’t limited to the reported states, the CDC said.

“This is because many people recover without medical care and are not tested for Salmonella,” the agency said.

In addition to throwing away onions, people should wash surfaces where there was contact and reach out to a doctor if severe salmonella symptoms develop. Symptoms include bloody diarrhea and a high fever, extensive vomiting and signs of dehydration, which usually begin six hours to six days after infection, according to the CDC.

Federal health officials are investigating to determine whether other onions and suppliers are linked to this outbreak.

An estimated 1.35 million Salmonella cases occur annually in the US, with about 420 deaths, according to the CDC. Infection usually happens by eating foods contaminated with animal feces.

Onions last year were also the cause of a salmonella outbreak that infected 640 people from more than 40 states.

Also last year, at least 55 people became sick in 12 different states after a salmonella outbreak was linked to dried wood ear mushrooms, the CDC said. And peaches and their products were recalled in 2020 after 101 people were sickened in 17 states by salmonella poisoning linked to the fruit.

Salmonella is a bacteria that can give you an infection called salmonellosis. Most human infections are caused by the consumption of food that is contaminated with the bacteria, the Centers for Disease Control reports.

The bacteria is named after Dr. Salmon, the American scientist who discovered it in the 19th century, according to the CDC.

What are the symptoms?

Contracting an intestinal infection from salmonella can lead to diarrhea, fever and abdominal cramps. These symptoms usually appear within three days after infection and usually go away in 4-7 days.

In some cases, the infection may spread to the blood stream and other parts of the body. These cases are associated with more severe diarrhea which can lead to hospitalization. Severe cases can be deadly if not treated promptly with antibiotics.

How common is salmonellosis and how often do patients die?

There are about 1 million food-related illnesses caused by salmonella contracted in the United States each year. Of these, about 19,000 people are hospitalized and 380 die.

How do I prevent salmonellosis?

In general, consuming raw animal products can increase your chances of coming into contact with salmonella. Here are just a few of the tips shared by the CDC.

Bacteria are destroyed by thoroughly cooking foods, such as meat and poultry. Shoppers, on the other hand, are being urged to “return them to the store of purchase for a full refund or trash them.”

To avoid the bacteria spreading, keep surfaces clean, wash your hands frequently, separate fruits and veggies from poultry, and cook meals high enough to destroy germs. CDC recommends a temperature of 160 degrees Fahrenheit for pork inside the meat.