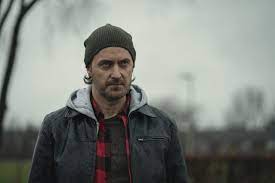 Richard Armitage’s tattoos are back in the news after the release of Netflix’s latest adaptation from one of Harlan Coben’s novels. On Friday, December 31, Stay Close debuted on Netflix, with people wondering whether Richard Armitage has real body art.

Close is the fifth adaptation of one of Coben’s novels to appear on Netflix, following Safe, The Stranger, The Woods, and The Innocent.

Richard Armitage’s tattoos suit him so well in the eight-episode series Stay Close that fans are convinced they’re genuine. Following the disappearance of his lover, his life is about to be turned upside down.

No, Richard Armitage’s tattoos are not real. They’re a component of Ray Levine’s character in Stay Close.

In Stay Close, Richard’s character is tattooed, and though he may have joked about the tattoos being genuine, the actor hasn’t endured hours of agony to get inked up for the part. “I was really tempted!” Armitage explained to Virgin Radio. He continued: “I left them on one night and got home, and I was like, ‘Could I really do this?,’ then by morning I’m like ,’ Nah, they look a bit grungy!’

Ray’s tattoos in Stay Close were deliberately designed. In the same interview, Richard stated: “The designing of those tattoos was fantastic because we looked at many aspects of the location, maps, and things he was attempting to put together, and we created this visual design for his arms that I thought was wonderful.”

Who is Mia Thornton, RHOP star who called out Nicki Minaj?

Who does Richard Armitage play in Stay Close?

The actor Richard Armitage is a member of the main cast and portrays Ray Levine. When his profession began to decline, Ray became a documentary photographer. He subsequently turned to being a paparazzi photographer when his career hit its lowest point.

Everything comes crashing down for him when he learns that his girlfriend has vanished without a trace. He gives up everything in order to look for her.

Other than The Fence, has Richard Armitage done any other adaptations of Coben’s works for Netflix? He featured in The Stranger at the end of January 2020. In The Stranger, Armitage played main character Adam Price, who was told that his wife Corrine was faking her pregnancy.

Stay Close is not related to The Stranger, and his personality and storyline are unconnected. Armitage stated that he would have loved to see a second season of The Stranger, but Stay Close piqued his interest. In an interview with Radio Times, Armitage explained: “I’d want to go back and do season two because the possibilities of Stay Close excited me. When the opportunity came along to do another one with the same team – same writer, different cast – it was a no-brainer for me. I said yes right away and then started reading the book, only to discover that this will be another page-turner like it was all before.” It’s a nonstop thriller from start to finish.

In 2018, Netflix signed a contract with prolific author Harlan Coben to turn 14 of his books into series or movies. Fans of Harlan Coben will be ecstatic!