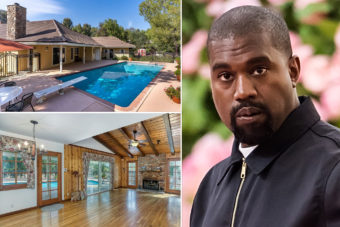 Kanye West has purchased a house close to his ex-wife Kim Kardashian. TMZ claims the mansion cost $4.5 million, is 3,650 square feet, and features five bedrooms. Strange rumors are now spreading across social media that Kanye was seen crouching in the bushes outside Kim’s home, but is it true?

Reports began flooding Twitter after Kanye purchased a new home near Kim, with people claiming that Kanye was seen lurking in the bushes watching Kim’s house. A photograph is currently circulating on social media depicting Kanye dressed up as a green bush to hide himself.

One person wrote on Twitter: “Bro Kanye hiding in the bushes dressed up as a bush is sooo awkwardly hilarious lol.”

“I wanna have someone as obsessed as Kanye is hiding in Kim’s bushes,” said another.

A third person added: “Was Kanye West really hiding in the bushes today???”

However, it’s all fake news and Kanye was never actually spotted hiding in the bushes.

How The Rumours Began

The fabricated narrative began when an Instagram account called rrapstreet.tv shared a photograph of a man dressed as a bush on the street and claimed it was Kanye.

If you look into the profile, you’ll discover that it has just 2,000 followers and has published a slew of absurd tales about celebrities. As a result, the Kanye tale is clearly bogus.

“Breaking: DRAMA unfolds outside Kim Kardashian’s house after Kanye West spotted hiding in bushes,” they wrote alongside the strange image.

In the caption, they added: “It is being remote that earlier this morning the cops were called to Kim Kardashian’s home after Kanye West was found hiding in the bushes outside the house.”

“Both parties have remained silent on social media but some are alleging that Pete Davidson was inside the home at the time of the incident. Ya’ll think Kanye went too far or nah?” they added.

Although Kim’s house was never visited by the cops, and Kanye was never seen lurking in the bushes, the post fooled a lot of people.

Many people were shocked by the post and believed it was genuine, while others called them out for believing such ludicrous things. One person commented: “The fact that people believe this is crazy.”

“Crazy how social media can have ya’ll believing anything,” said another.

A third person added: “This gotta be fake and how they know it’s Kanye?”