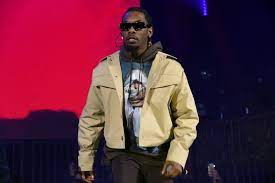 Just a few days before his 30th birthday, Cardi B surprised him with an extravagant present, as predicted. The hip-hop artist presented her spouse with a $2 million cheque for his 30th birthday while the pair partied with several celebrities, including Kanye West. Can Cardi B be in charge of our birthday presents once again next year?

Cardi B Gifts Offset $2m For His Birthday

When you reach your thirties, the last thing that rings bells is a few million dollars in the bank. To celebrate her husband’s birthday, Cardi threw him a party filled with A-listers. She also presented him with a cheque for $2 million as expected. This was all typical birthday behavior, you know?

The ‘Up’ rapper took to IG to document the party and the gift, writing ‘He [Offset] literally got it all.”

As reported by TMZ, Offset’s gifted millions will go towards future business investments.

Offset has an estimated net worth of about $26 million, according to Celebrity Net Worth.

Offset’s success as a solo artist and with Migos has brought his net worth to where it is today. Migos first appeared in 2008, but their chart-topping song “Versace” brought them more attention in 2013. Offset released a solo album called “Father of 4” in 2019 after Migos’ success, boosting his standing even higher.

Outside of his music career, Offset is known to be the owner of Faze Clan, a professional esports and entertainment organization located in Los Angeles, California. In talks with The Verge, the rapper explained: “It was a special thing and I felt like I needed to be a part of it.”

Offset received a $1M check from Cardi B, but did you know that he is also a generous gift giver?

When Cardi B turned 29, her husband Offset gave his wife a vacation house in the Dominican Republic, according to Buzzfeed. What a surprise!

At the time, Cardi explained: “For a hot minute now I’ve been telling Set that I really want to invest in short-term home rental properties in the DR and other Caribbean countries (since people vacation all year around in those locations), but I felt like he didn’t agree with me and would rather put money into other investments.

“Well, I was wrong. This was sooo amazing to me.”