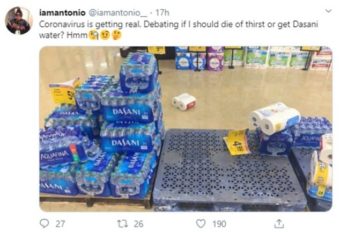 The COVID-19 coronavirus epidemic has forced millions of people to be quarantined or self-isolate. In the last week, a lot of things have changed in the United States as a result of the pandemic. The National Emergency Act and most states’ restrictions on public gatherings with more than 1000 people have been implemented.

In the past week, photographs and videos of toilet paper shelves that are completely empty in stores and supermarkets all around the world have gone viral. Panic buying and stockpiling on all necessities has begun as a result of the missing goods. People have started complaining about how many empty shelves there are in shops and how shortages are affecting their lives. Humorous memes mocking undesirable things have started circulating on social media. One of these appears to be Dasani water.

Even though people cannot get coronavirus from tap water, bottled water is one of the things in high demand right now. Pictures of barren racks with just Dasani on them have been shared all over social media. People are also expressing their displeasure with the product and their lack of surprise at its existence.

One user wrote: “No water here but Dasani. Even in a ‘crisis’ nobody drinking that trash a** water.”

Viral ‘You Should Kill Yourself… Now!’ meme explained

Other grocery items, in addition to Dasani water, have attracted negative feedback. One user wrote as the caption for chocolate hummus being left on the shelves at Trader Joe’s: “Somehow reassuring in the midst of coronavirus shopping frenzy to know that people still have the sense not to buy [chocolate hummus] and buffalo hummus.”

Some fast food restaurants in the Greater Toronto Area, however, have been experimenting with a vegan burger for quite some time. According to recent research, one-third of people who eat at these establishments say they would switch to a plant-based diet completely or mostly if given the option.

One Michigan grocery store proved that vegan meat substitutes were the least popular on the shelves, with many left behind on otherwise empty displays. However, another user showed that pork was the item getting left behind at his grocery store, where everything else was nearly all empty.