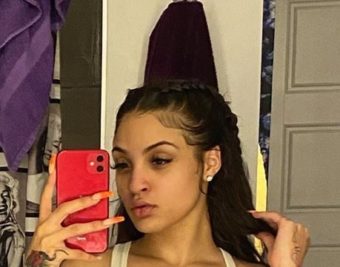 Marissa Da’Nae is best known as the girlfriend of NLE Choppa, who has had an entire career in the rap industry, and he is still a teenager. With multiple projects and hit singles under his belt, NLE is currently working towards his sophomore album Me vs. Me, set to drop on Dec. 17.

While preparing this project and celebrating his Thanksgiving holiday on Thursday (Nov. 25, 2021), Choppa was seen with his girlfriend Marissa Da’Nae. As she posted a video with NLE and a few photos of herself dressed up for Thanksgiving, fans noticed in the comments a bump in her midsection, which they suspected to be a potential pregnancy.

It is not sure how long Marissa and Choppa have been dating, they are both around the same age range. NLE is 19 years old, as his birthday was this month on the 1st. Da’Nae is 21 years old, and currently works as a Wild N Out girl for Nick Cannon’s famed comedy rap show.

Earlier this year in January, Choppa was seen shooting his shot at former child acting sensation Skai Jackson, so he was likely single at the time. Now, he appears to be in a relationship, and could be looking to have a second child, as his first was born in Summer 2020.

Do you think NLE Choppa’s girlfriend is pregnant? Check out the photos she posted of herself below.

NLE Choppa, a.k.a as Bryson Lashun Potts is an American rapper who hails from Memphis, Tennessee.

The artist recently celebrated his 19th birthday The artist has a lucrative music career as well as a child with his former partner who was named Mariah J.

He is reported to be having a romantic relationship with the business owner, model and TV show’s actress Marissa Da’Nae.

Da’Nae is the chief executive officer for Brazy Collections which is a brand that has been which is described in its slogan as a”Brazy, however Lavish Boutique.

Brazy Collections is a line of products offering a variety of collections, including items, swimwear, accessories and much more.

How tall is Marissa Da’Nae? She has a great body figure as well as personality. She is 5 feet and 7 inches tall. She weighs around 57 Kg, and exact body measurements are 36-27-42 inches.

The rapper’s girlfriend is also the CEO of @lavishhairextensions_, a company selling Grade A HD Lace Wigs.

On Facebook Marissa Da’Nae’s name is listed with brackets, as Rissa.

The user is from Atlanta, Georgia, went to Douglass High School and now is employed at Nick Cannon Presents Wild “N Out,” an American sketch comedy and improv game series.

With a significant following across social platforms, @the.mxrvssa has more than 37,000 followers on the authentic Instagram account that is privately owned currently.

Her main profile is in her bio of @mxrvssa and is currently not available profile.

Another account dubbed @_mxrvaxx includes a lot of posts about the model, including stunning outfits and makeup designs.

@mxrvssa also has a private Twitter profile with over 30,000 followers.

Creative videos of the star can be found on @mxrvssa‘s TikTok, whereby she often uses trending sounds and takes part in popular challenges.

The artist also suggested the couple keep in constant contact through phone calls in tweets that stated that their love is just right.

@mxrvssa said that she frequently prefers hanging out with her boyfriend instead of her acquaintances in the form of a TikTok video, which confirmed that she prefers to be with him.

With a popular TikTok audio in which the user said that she’d never get drunk and ugly’ with anyone except NLE Choppa.

Another video on TikTok from Marissa Da’Nae explains her as uncomplete without her boyfriend. It also shows that they’re a close couple.