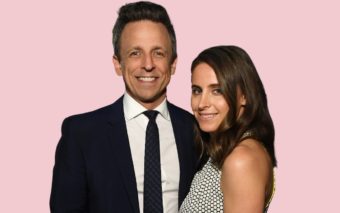 Seth Meyers rang in this Thanksgiving as a proud dad of three. On the Thanksgiving edition of his CORRECTIONS segment, the Late Night host revealed his wife of eight years, Alexi Ashe, gave birth to their third child together more than two months ago. “I am now very excited to give what I think is the best correction that I will ever give,” he teased. “I said on this show many times that I am the father of two. That is incorrect. For the last 10 weeks, I have been the father of three.”

During the Thanksgiving episode of his late-night show, Seth shared a video of his two sons, Ashe, 5, and Axel, 3, dressed as turkeys to reveal their little sister, who was also dressed in a turkey costume. “One, two, three, surprise!” the kids proclaimed before showing the baby.

Seth’s mom, Hillary Meyers, who was a guest on the Thanksgiving episode, had the honor of announcing her granddaughter’s name, Adelaide, after her mom and Seth’s grandmother. “I knew, knowing Seth and Alexi, it had to start with an A, it had to be a cool name and I know what family means to all of them,” Hillary said, “so I thought I pretty much had it.”

While the news is a welcomed surprise, Seth tends to spark headlines with the births of his children. In 2018, he revealed to viewers that Alexi ended up giving birth to their son Axel in the lobby of their apartment building.

“I called 911, and over the course of a minute conversation, I said, ‘We’re about to have a baby! We’re having a baby! We had a baby,” Seth said on the show at the time. “I went from someone calling in about an emergency to just sharing good news with a stranger. Like, ‘Yeah, it’s a boy!'”

The 38-year-old has been employed by the Sanctuary for Families and the Brooklyn District Attorney’s office.

Seth has described her once as “New York’s leading service provider and advocate for survivors of domestic violence, sex trafficking, and related forms of gender violence.”

The couple first got together in Chris Kattan’s wedding 2008, and were married five years later in 2013.

Seth Meyers and Alexi Ashe Have Three Children Together

Seth and Alexi are now together for 8 years, and have three children with each other.

Their daughter Ashe Olsen is five, and then their son of three years Axel Strahl.

Ashe was born at the entrance of the New York apartment building because they were unable to make it to the hospital quickly enough.

Similar thing was the case with Axel as well Axel was born in the middle of Uber.

They were married on September 20, 2021. welcomed their first child, Adelaide and they named her Addie in reference to the short form.

Who is Victoria Pedretti Dating?

“We had another one, you guys!” Seth Meyers — who is already dad to sons Ashe Olson, 5, and Axel Strahl, 3 — revealed during Thursday’s episode of Late Night with Seth Meyers.

Surprise! Seth Meyers is now a father of three.

On Thursday evening, the 47-year-old comedian revealed during his late-night talk show series, Late Night with Seth Meyers, that he and his wife, Alexi Ashe, secretly welcomed their third child, a daughter named Adelaide, in mid-September.

Joined by his parents, Hillary and Larry Meyers, as well as his brother, Josh Meyers, who served as guests on the show, Seth revealed the exciting news during a Thanksgiving segment he does yearly, where his sons — Ashe Olson, 5, and Axel Strahl, 3 — and dog Frisbee dress up as turkeys and a pilgrim.

In the video, Seth’s two sons are seen in their matching turkey costumes bouncing around on a couch, before the two make the big reveal by showing their infant sister in a matching outfit. “One, two, three, surprise!” the boys exclaim in the clip before they give their new sibling a kiss on each cheek.

“We had another one, you guys!” Seth shared with a wide smile after the clip played. He then revealed that Ashe, 38, had delivered their latest addition “10 weeks ago.”