Lauren Zima and Chris Harrison Love Story in 2022: Everything We Know So Far 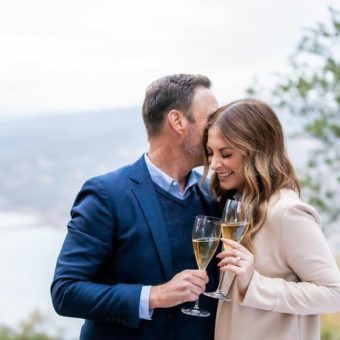 Lauren Zima is a popular Television star. Moreover, the former Bachelor host, who exited the franchise in June, has been dating Zima since 2018. The pair made their red carpet debut at a party for the Screen Actors Guild Awards. In an interview for Viall’s “The Viall Files” podcast, Zima revealed that she made the first move in the relationship.

Infact, to celebrate Zima’s 33rd birthday, Chris took his love for a sunset sailboat cruise complete with rosé champagne and charcuterie. The couple denied rumors that they secretly tied the knot after attending a wedding together where Zima served as a bridesmaid, in April 2021.

Other than this, she is an American television personality, entertainment reporter, actress, and producer. She is currently a senior producer and host at Entertainment Tonight. Let’s find out more about Lauren Zima and Chris Harrison Love Story in 2022.

The pair made their relationship red carpet official in January 2019, appearing together at a party for the Screen Actors Guild Awards. Several months later, Zima celebrated the couple’s one-year anniversary with an Instagram tribute to her beau.

“In this year I’ve leaned on you, laughed with you and fallen in love with you for the incredible man that you are,” she wrote in August 2019. “Thank you for adding to my life with your positivity, perspective and patience, and for supporting me in becoming exactly who I want to be.”

How tall is Lauren Zima? As a television star actress, she is certainly conscious of her appearance. Likewise, she stands tall at 5 feet 3 inches and weighs 57 kg. Likewise, the actress has beautiful blue eyes and brown hair. Her body measurements are 34-26-38 inches. She wears a bra cup size of 34 BB.

Lauren Zima and Chris Harrison are engaged in 2022

The former Bachelor host, 50, announced the news on Instagram Monday.

“I love you @laurenzima,” he captioned a slideshow of photos from the proposal, which took place at Brand Napa Valley in California.

“We tell each other this all the time, and we said it again in an unforgettably beautiful moment this weekend: I didn’t know love could be like this,” she wrote. “You are the most incredible partner. Thank you for loving me, championing me and asking me to marry you. Here’s to the next amazing chapter, and all the rest.”

Harrison and Zima, an Entertainment Tonight correspondent, have been together since 2018.

The engagement news comes almost five months after Harrison’s official exit from the Bachelor franchise. The longtime host came under fire earlier this year for his response to then-Bachelor contestant Rachael Kirkconnell’s past racially insensitive behavior, which had resurfaced online while Matt James’ season was airing and engulfed the franchise in controversy.

“Chris Harrison is stepping aside as host of The Bachelor franchise,” Warner Horizon and ABC Entertainment said in a joint statement on June 8. “We are thankful for his many contributions over the past 20 years and wish him all the best on his new journey.”

Added Harrison, “I’ve had a truly incredible run as host of The Bachelor franchise and now I’m excited to start a new chapter. I’m so grateful to Bachelor Nation for all of the memories we’ve made together. While my two-decade journey is wrapping up, the friendships I’ve made will last a lifetime.”

Harrison, who previously appeared as a recurring guest on ET’s Bachelor segments, told PEOPLE in 2019 that Zima made him “happy.”

“It’s been easy and I think that’s how it all starts,” he said. “We started dating and, like any relationship, she made me happy. She was kind, nice, we got along, she blended in great with my friends, and just all those steps in the relationship where you start checking those boxes off and it gets better and better and better.”

The TV personality was previously married to college sweetheart Gwen Harrison for 18 years. The pair — who share two kids, Joshua and Taylor — announced their divorce in 2012.

She was hired by Entertainment Tonight in 2015 after a brief stint at Newsy, where she served as a creative director and host.

Currently, her coverage for Entertainment Tonight includes hosting The Bachelor: Roses and Rosé, a comedic recap show that is available on YouTube.

On October 25th, 2021 Harrison and Zima announced their engagement.

Is Richard Madden Gay? His Relationship & Dating Life Rumors in 2021