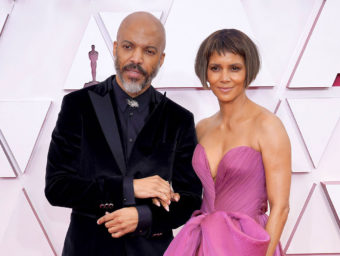 It’s no secret that Halle Berry and her boyfriend Van Hunt were married. However, everything isn’t as it appears.

Although it’s been a while since Halle and Van started dating, seeing the pictures of them together on New Year’s Eve caused everyone to believe that they may have secretly married. Given how celebrities prefer to keep their personal lives private, several well-known personalities have been fooled.

Debunked: Did Halle Berry and Van Hunt get married?

No, Halle and Van were not married. We’re aware that the picture that actress posted on her Instagram might have caused this misconception.

However, it appears as if Halle was in a playful mood when the new year begins. In fact, Dwayne “The Rock” Johnson and Octavia Spencer were among those fooled. So if you were one of them, don’t be concerned; you weren’t alone.

A Look At The Couple’s Pictures

On Instagram, Halle posted a photo with Van. The pair were seen kissing in the picture. It appeared as if they were at the altar, as Halle was wearing a flower crown. While she did not wear a wedding gown, it appeared like the pair went untraditional and dressed up in sneakers instead of formalwear before exchanging their vows.

A Look At Their Relationship

As per US Weekly, Halle teased her relationship in August 2020. However, did not disclose it was Van until September 2020 as she shared their first picture together on her Instagram.

In the photo, Halle was kissing Van on his cheeks. The pair did not hesitate to show the world a glimpse into their relationship after this, as they frequently published pictures of themselves together.

In fact, in an interview, Van admitted that Halle had influenced his music. He said: “I could show you rather than I could tell you, and I will show you really soon, I promise. The inspiration for our relationship goes across everything, even in my parenting. I’m a completely different person, I can say it like that, and I think that it’s improved every aspect of my life.”

While the pair is not bashful about demonstrating their relationship, their most recent photograph has fooled many people.

Jeremy Clarkson wife: Why did Clarkson split from first wife?