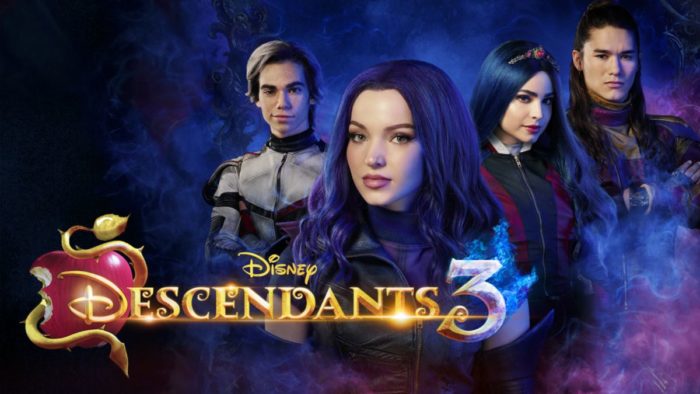 Descendants 3 Synopsis: It’s an epic and memorable conclusion to such a Disney Channel film trilogy barely known since the first film. The teenagers of the Disney’s most infamous villains also look tor recruit a new batch of villains as they return to the Isle of the Lost. It is directed by Kenny Ortega. The movie was announced to actually be happening in February of 2018. The end of Descendants 2 ended with China Anne McClain’s character of Uma saying “You didn’t think this was the end of the story, did you?” The movie was released close to one month after the sudden passing of star Cameron Boyce. The film premiered on Disney Channel on August 2, 2019, and in other parts of the world on October 12, 2019.

The film begins with a big dance number where all the Isle kids line up hoping to be selected. Uma is still on the loose and expected to crash the party at any moment. Mal accepts Ben’s marriage proposal. Everyone is ecstatic except Ben’s ex Audrey. When the VKs go to the Isle to pick up the four new kids Hades attempts to escape. This prompts a decision to permanently close the barrier; effectively ending the exchange program intended to redeem the kids on the Isle. Overcome by jealously Audrey steals the queen’s crown and Maleficent’s scepter and embarks on a rampage of black magic shenanigans. The only thing that can stop her is Hades’ ember. Mal and the others secretly return to the Isle to recover the ember from Hades, who is revealed as Mal’s absentee father. They still can’t prevail alone; they must set aside their differences and work with Uma and her crew if they are to bring down Dark Audrey. The film has its share of moments. It was good to finally see Ben as a beast. The engagement in the beginning is a nice touch; Ben and Mal have always been so cute together that you can’t help but root for them. This is the only significant relationship event in the film. Evie has one song about love’s first kiss; her boyfriend Doug has morphed from a clean-cut nerd into a grunge rocker. Carlos and Jane’s relationship is developed even less. I know this is Disney channel, but these are good looking young people so their relationships should have more content; perhaps at the Grease level. Adding Cheyenne Jackson as Hades gave some spunk to the film, even though he is only featured in three scenes. Kristin Chenoweth still has not resumed her role as Maleficent from the first installment; a duet between her and Jackson about their strained relationship would have been classic. There is a song accompanying every plot event, although only Audrey’s “Queen of Mean” and a duet between Hades and Mal carry much zing. The new VKs don’t get much attention. Dr. Facillier’s daughter Celia had potential but becomes mainly a sidekick. Dizzy Tremaine and the Smee twins are just there as filler characters. Cameron Boyce’s recent young death is a sad undercurrent throughout, but it does not diminish the fun factor too much. Predictably, in the end peace is restored to Auradon, everyone is forgiven, and they are all better people for it.

The film ends with the barrier over the Isle being permanently broken, which is akin to letting all the inmates in a maximum-security prison walk out. There are some Isle residents who should not be loose. It would have been better to release all the kids and allow them occasional visits to their parents. The ending left me with a feeling of incompleteness; having the royal wedding would have tied up all the loose ends.

The movie touched cords with many current political events: open borders vs security, splitting up families, good and bad can come from inside and out, criminal justice reform. The conclusion does not slam the door shut on the possibility of future installments but had a sense of finality. This is supposedly the last Descendants movie; it would be somewhat disappointing if that holds. There is enough material remaining for a Descendants 4, although it might be difficult to do without Boyce. Casting anyone else in his role would be borderline disrespectful. But Carlos is not an essential character; it has always been Mal’s story. Maybe they will pick it back up in 2 or 3 years. The music was great. The story was good not as great as the first two movies but it was still very good. Kenny Ortega is the best dance choreographer around and has been doing it since (thriller) and doesn’t disappoint with this dances and songs in the third descendants. There were new characters that were added which was nice but then some of the actors weren’t in this movie but were in the first two movies (example Lonnie, mulan’s daughter) my kids missed those characters. This movie is very similar to the politics going on in America now related to the extension/upkeep/fortifying of the southern wall. The movie was worth seeing and good job Disney for having a very nice send off for Cameron Boyce may he Rest In Peace.

Overall Descendants 3 had its flaws but is still enjoyable. Both kids and parents can enjoy the costumes and theatrics. The Descendants series has been a big success for Disney, and part 3 scores a 7/10.

Mal (Dove Cameron), Evie (Sofia Carson), Carlos (Cameron Boyce) and Jay (BooBoo Stewart) return to the Isle of the Lost to recruit a new batch of villainous offspring to join them at Auradon Prep. When a barrier breach jeopardizes the safety of Auradon during their departure off the Isle, Mal resolves to permanently close the barrier, fearing that nemeses Uma (China Anne McClain) and Hades (Cheyenne Jackson) will wreak vengeance on the kingdom. Despite her decision, an unfathomable dark force threatens the people of Auradon, and it’s up to Mal and the VKs to save everyone in their most epic battle yet.