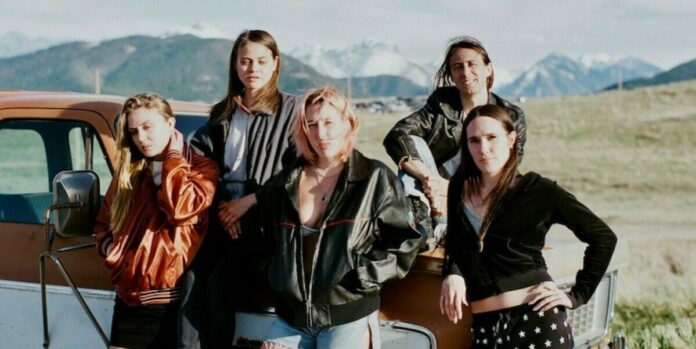 ‘Candy Land’ unfolds in a way that is somewhere between a true-crime documentary and a mystery that you leave midway, right before you get to the actual motives of the murderer. This is because the story follows a specific yet deliberately vague timeline of events, with the audience only glimpsing the parts that are necessary to move the plot forward without revealing the entire picture. This keeps the audience in suspense and keeps them guessing until the very end.

The movies story revolves around a few prostitutes, and through its characters, and also lights on how their life decisions have led them to their current paths and how they must learn to cope with the consequences of those decisions. Official synopsis reads as, “A seemingly naive and devout young woman finds her way in the underground world of truck stop sex workers a.k.a. “lot lizards.””

Remy goes to see Levi that night and it seems innocent at first glance. Even though it appears innocent at first glance, we know that she is going to target Levi in the future. Remy has consistently shown behavior that leads us to believe that she has an ulterior motive. She has been known to be cunning and manipulative, so it is likely that she is planning something sinister when she goes to see Levi.

Levi is totally unware what is going to happen with him, as she gets closer to him, Levi smiles, as he has liked Remy, since the beginning. But the biggest shock is when she stabs him in the face, right when he is at his most vulnerable. This is the death that broke our hearts. Levi’s death was so shocking because it was unexpected and it occurred at a time when he was so happy to see the person he had grown to love. It was a betrayal of the trust he had placed in her.

In spite of all the suffering Levi had endured, he did not deserve to be killed in such a manner. Remy continues on her rampage, and she begins her assault on Nora. Despite his hardships, Levi’s death was completely unjustified. Remy then turns her wrath towards Nora, not letting up until her mission is complete.

Meanwhile, Sadie tells Riley that she wants to leave. Riley supports her but is evidently devastated by this. She goes looking for Nora or Levi, but they don’t open the door. When she becomes increasingly frustrated, she finds Remy, who eventually staggers her. Despite the difficult emotions running through her, Riley still acts in support of Sadie’s decision and does her best to find comfort in her friends. However, Remy is the only one who is able to provide any solace in the moment.

As Sadie goes through the brochure that Theo left outside when he first visited them outside their stop, we see her not connecting the dots yet. It talks about cleansing, and she doesn’t seem to have yet connected the dots.

Then when Remy arrives and tells her that the others are going with her, she begins to suspect something is wrong with her. It’s then that a terrified Sadie discovers their dead bodies. As she starts to become suspicious, the group starts to act erratically and Remy’s behavior is particularly concerning. She then finds out that the others have been killed and she realizes that she is in serious danger.

Eden Brolin is an American actress, best known for her role as Charlie Singer in the Beyond television series and as Mia in Yellowstone. She is the daughter of actor Josh Brolin and Alice Adair.

As an actor, producer, and writer for the past three decades, William Baldwin has distinguished himself as a versatile and talented individual who continues to showcase his many talents in the field of film and television. His work has been highly praised by both fans and critics, and has earned him numerous awards, including an Emmy Award, a Golden Globe nomination, and an Academy Award nomination. He has also produced several successful projects and has written several screenplays.

Guinevere Turner known for American Psycho (2000), The Notorious Bettie Page (2005) and Go Fish (1994). She is a versatile actress and filmmaker, having written, directed and acted in numerous films, television shows and plays. She has a knack for creating compelling and complex female characters that have become iconic in the world of cinema.

Billy started singing at the age of 5 after watching Sesame Street and KISS for the first time as a child growing up in El Paso, TX and is related to the great Edgar Allan Poe. He comes from a musical family. His family passed down the musical tradition from generation to generation, and Billy was inspired by the music he saw on TV and in his family. His musical talent was further nurtured by his parents and relatives, who helped him hone his craft.