WATCH: AOC takes part in one hot chip challenge amid the festive season 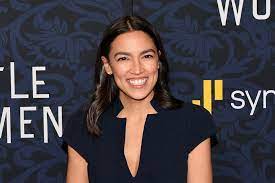 Alexandria Ocasio-Cortez, better known as AOC, has taken part in the one hot chip challenge to make the festive season more engaging. AOC has shown everyone that she understands how to keep up with the latest trends throughout the years. She has created a TikTok account and streamed a game with other YouTubers, among other things.

Now, at the start of the holiday season, AOC has taken on a viral challenge and has a lot to say about it.

AOC wished her followers a Merry Christmas on December 25. She also offered an insight into how her day had gone. AOC spoke to her Instagram followers and revealed she had put up socks for Christmas. While she did not disclose what items she received, there was one present that she could not stop raving about.

In 2021, AOC was given a hot chip known as the “one chip challenge.” Several people had undertaken the challenge to hear the chip, which is billed to be the hottest in the world.

AOC, without thinking too much about it, takes little bits of the hot chip and puts them in her mouth. For the first part of the film, she is able to handle the spiciness, but things soon go downhill. The heat of the chip hit her before she knew it. She did, however, keep her cool throughout the ordeal.

After AOC attempted to do the challenge, her followers were quick to react to it. Here’s a look at some of the reactions on social media:

How AOC has been a trend setter in politics

This isn’t the first time that AOC has attempted to do something considered unusual for politicians. She teamed up with YouTubers and Twitch streamers to play a game of “Among Us” previously.

She also mentioned being on TikTok. She noted, “So, as I said a few days ago, I started a lurker TikTok account because I was watching one too many bootleg TikTok videos uploaded to Instagram and thought I should go straight to the source and cut out the middle person app except now I have anxiety about recording whack videos so I’m back on Instagram stories.”

At the moment, it is unclear if AOC is still on TikTok or not.