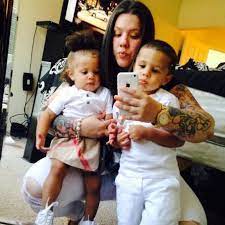 Nicole Covone was Lil Durk‘s first baby mama, and she managed to keep a lot of his personal life private. It’s never simple to consider ending a relationship, especially when you’ve invested so much time in someone. It’s all too easy to come up with reasons why your lover is still worth staying with, even if you know deep down that it isn’t working. That was not the case for Nicole Covone and Lil Durk, however.

Nicole Covone is Lil Durk’s first baby mama. How many children does Lil Durk have? What do we know about Nicole Covone?

Who is Nicole Covone?

Around this time, in the summer of 2013, Covone appeared in court to defend her husband. Three years his senior, 23-year-old Covone was “literally about to pop”, according to sources.

On 20 July 2013, KollegeKidd reported the birth of Bella Banks.

Nicole Covone – known on social media as OTF_NIKKI – gave a “special shout out to my love”.

However, not long after Bella’s birth, Lil Durk’s third child Zayden was born. Of no relation to Nicole, Zayden’s birth shook her and Banks’ relationship.

Who Is Lil Durk?

Lil Durk is famously known for his rapping skills. Away from his career, he has six children with five different women. Even though he is currently dating the mother of his sixth baby, his relationship with Nicole Covone is arguably one with the most history.

His first two children, Angelo and Bella, were fathered by Nicole Covone. Whether Lil Durk’s first baby mama has ever met any of his others is unknown.

The identity of the mother of Durk’s third child, Zayden, is unknown. Likewise, Durk has kept the identities of the mothers of his fourth and fifth children secret.

Their names, however, are Du’mier and Skyler.

Despite a couple of ups and downs – the pair “broke up for 2min and 21sec” in 2017 – they appear to be still together, with Durk proposing to India in December 2021. Lil Durk is now engaged to India Royale, HITC reports. He “surprised India” with a “romantic proposal” during a concert in Chicago. His children were present.