What is the TikTok magnet trend? 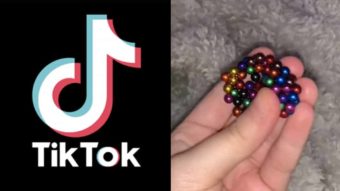 A few strange trends have started to take over TikTok revolving around magnets, one that has people faking the fact they’re magnetic, and another that has led some to be admitted to hospital.

As it’s become more and more like Vine, with comedy skits, pranks, and everything else taking over, TikTok has been home to some wacky and strange trends. In the past, users have reported seeing real-life ‘zombies’, tried to convince others that TikTok is shutting down, and even tried to make it seem like they can talk to spirits.

However, in recent days and weeks, a few trends revolving around magnets have taken over and they’re both pretty usual. However, one in the UK has seen people admitted to hospital over.

An 11-year-old and a 13-year-old were reported to have had major surgery after swallowing magnets while taking part in the trend. A TikTok trend where teenagers use tiny magnets as fake tongue piercings has prompted the NHS to call for the metal balls to be banned.

The magnet trend involves placing small, round magnets on both sides of your tongue to make it look like you’ve gotten your tongue pierced. Some have also done the same thing with their nose to make it seem like they’ve gotten their nose pierced. The challenge is dangerous because it’s not hard to accidentally swallow one of the magnets, which can then wreak havoc on your internal organs.

What is the TikTok Magentic Trend?

The other ‘magnet challenge’ on TikTok is equally strange but isn’t as life-threatening. In fact, it’s just a complete hoax.

What some users are doing is suggesting that they are actually magnetic and can make things stick to themselves. Of course, this isn’t true. As one post debunked things, pointing out that TikTokers are using tape to make one magnet stick to them.

This makes it seem like they’re magnetic, but, obviously, they’re faking it.

@melissadesmAfter many requests, here is the Tik Tok Magnet Challenge. #SpotlightAPI #vaccine #pfizer #covid #magnetchallenge #conspiracy♬ SUNNY DAY – Matteo Rossanese
Of course, curiosity always gets the best of some and they’ll dive into a hole for both trends, regardless of what happens.

However, anyone who messes with the ‘Magneto Balls’ trend should heed the warnings. As for the latter, no one is turning into X-Men’s Magneto anytime soon.

Recently, there have been several reports of fairly young children getting admitted to the hospital after they swallowed one or more magnets. One nine-year-old boy, Jack Mason, went through intensive surgery at the Royal Hospital for Children in Glasgow and had to have his appendix, as well as parts of his small and large intestines removed.

In speaking with the BBC, Jack’s mother Carolann McGeogh said she was told that her son’s problems were severe.

“It was explained to me that the damage these magnets can cause could be so extreme that he might not pull through,” she said. “Through floods of tears I then had to sign my permission to the operation, acknowledging that ‘anything could happen,'”

“Jack is lucky to be alive,” she continued. “If his experience can prevent other kids from enduring the same, then I will do everything I can to do that.”

In Britain, 65 children have been admitted to the hospital in the past three years for swallowing magnets, and it’s possible that the magnet trend is only accelerating those figures.

Swallowing magnets of any size can become life-threatening

Sky News reports that magnets can become “forced together in the intestines or bowels, squeezing the tissue and cutting off the blood supply.” Britain’s National Health Service has also been warning parents about the dangers of magnetic balls for years.

In speaking with the BBC, a spokeswoman for TikTok said that the company is always monitoring for videos that could cause harm to other users. “We do not allow content that encourages, promotes, or glorifies behavior that might lead to injury,” the spokeswoman said. “Our safety team uses a range of measures to keep our community safe, and we have been conducting additional proactive searches to detect content of this nature.”

Although children clearly swallowed magnets long before they saw people putting them on their tongues on TikTok, that doesn’t necessarily mean that the TikTok trend isn’t harmful. Any time users encourage one another to do something that’s potentially dangerous, the platform should step in to prevent anyone from getting seriously injured or winding up in the hospital.