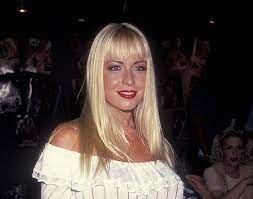 Shannon Wilsey was an actress in the adult film industry. One of the most prominent adult industry models of her time, she achieved notoriety within her short (1990–1994) career due to her onscreen presence and personal life. In January 2002, AVN ranked her at #19 on their list of the top 50 adult stars of all time.

Who is Shannon Wilsey?

She was born on 9 October 1970 in Laguna Beach, California. After her parents divorce in 1972, Shannon moved with her mother to Texas, where she was raised. After a brief stay with her father in Oxnard, Shannon went on to live with her grandparents in Mission Viejo, where she attended high school.

Wilsey was credited with her real name in a number of B movies. These included The Invisible Maniac (1990) and Camp Fear (1991).

According to wikipedia, Wilsey died by suicide in 1994 by shooting herself after a car accident.

On the evening of July 11, Wilsey was involved in an auto accident with her Corvette in which she reportedly broke her nose and injured her face.

Upset over the accident, she went home to Universal City, asked a friend to walk her dog, and then called her manager, Nancy Pera. It was Pera who later discovered Wilsey in the garage of Wilsey’s home.

Wilsey did not die immediately; she died hours later in the hospital, after her father decided to shut down her life support systems once it became obvious that she would not survive her injury.

Wilsey’s ex-boyfriend, comedian Pauly Shore, stated that he was with her when she died in St. Joseph’s Hospital in Burbank.

Wilsey’s funeral, two days later, was attended by friends, family, and limited numbers of adult industry associates. Shore was the only one of her ex-boyfriends to attend the service.

Of Wilsey, Shore said, “She was the nicest, most beautiful girl I ever met … [her death] was a very dramatic thing for me.” When asked why she killed herself, he said, “She became Savannah. She became her character, who was into drugs, and needed reassurance all the time. She forgot who Shannon was … I knew she wanted out.”

Wilsey’s death was the third high-profile suicide in the adult industry.

Her body was cremated and the ashes given to family & friends.

Wilsey was introduced to the adult film industry by actor and director Rex Cabo.

She started out at first in photo spreads for Cheri, Hustler, Swank, and Penthouse, and then she signed an exclusive contract with Vivid Entertainment in 1991 and became one of the earliest Vivid Girls.