What Does A White Poppy Symbolize? Know Everything About It 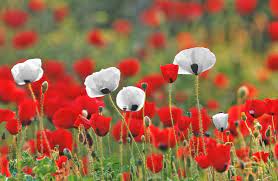 Remembrance Sunday is a Sunday on November 14th in 2021 that sees Britain pay respects to all those who died fighting during the two World Wars as well as the conflicts that followed. It’s a tradition that has been going on for more than 100 years. The first Remembrance Day took place in 1919.

There are many formal ceremonies, like wreath-laying, that take place during this time of reflection, but there are also traditions that can be enjoyed by everyone throughout November, such as wearing a poppie.

What Does The Purple Poppy Represent?

The red and white poppies represent people. However, the purple poppy is for the animals who lost their lives in the conflict.

Animal Aid, a charity, created the poppy in 2006. They felt it was important to remember all the animals who served and make sure they are not forgotten.

What Does a Blue Poppy Represent?

Blue poppies are a natural part of nature but they don’t have any connection to Remembrance Day.

Blue poppies can be found in the Himalayan Mountains. They are considered a rare species of flower.