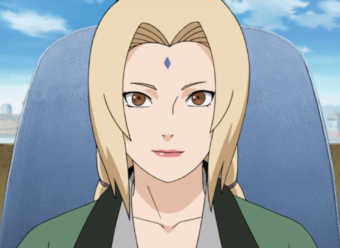 Tsunade is a descendant of the Senju and Uzumaki Clan, and is one of Konohagakure’s Sannin. She is famed as the world’s strongest kunoichi and its greatest medical-nin. The repeated loss of her loved ones caused Tsunade to later abandon the life of a shinobi for many years.

She is eventually persuaded to return to Konoha and take on the mantle of Fifth Hokage Godaime Hokage, literally meaning: Fifth Fire Shadow), where her skills prove invaluable to the village.

Tsunade is the granddaughter of Hashirama Senju and Mito Uzumaki. Because Hashirama was the First Hokage of Konohagakure, Tsunade is called “Princess” (姫, Hime).

Hashirama doted on Tsunade when she was very young because she was his first grandchild, and found her deviance and her adoption of his own gambling habits highly amusing.

Tsunade was very willing to believe in the attainability of dreams while Nawaki and Dan were alive, and that by supporting and encouraging those dreams she might be able to help achieve them.

When both died gruesomely shortly after receiving her support, Tsunade lost faith in the idea of dreaming for anything, believing that the mere pursuit of it would be doomed from the outset.

She becomes especially critical of wanting to be Hokage, as both Dan and Nawaki died trying to attain the title and the past Hokage have all died prematurely and, as Tsunade argues, pointlessly because they held the position; she concludes that to be Hokage is a fool’s job.

The answer is simply no.

Tsunade is a fair-skinned woman with brown eyes and straight blonde hair that parts above her forehead.

She was very skinny throughout her childhood to the point of being known as flat-chested.

By young-adulthood however, Tsunade grew into a slender woman of curvaceous frame with above-average height and noticeably large breasts, which Jiraiya noted to be 106 centimetres.

She is in fact widely regarded as the most beautiful kunoichi in the world.

By her fifties, she appears much older, being heavily wrinkled while rather frail-looking.