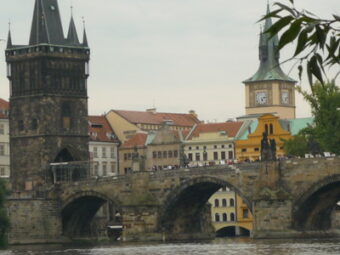 Europe is a continent located entirely in the Northern Hemisphere and mostly in the Eastern Hemisphere. It is bordered by the Arctic Ocean to the north, the Atlantic Ocean to the west and the Mediterranean Sea to the south. It comprises the westernmost part of Eurasia. Europe covers about 10.18 million km2 (3.93 million sq mi), or 2% of Earth’s surface (6.8% of land area), making it the second-smallest continent. Find out in detail best places to roam in Europe.

Barcelona, Spain: The hip city of Barcelona is the cosmopolitan capital of Catalonia. With its Mediterranean atmosphere and its architecture by Antoni Gaudí, it’s no wonder that this beautiful Spanish city is a favorite destination for tourists from all over the world. Thanks to its mild climate, you can enjoy its many attractions year-round.

Enchanting Venice is built on more than 100 small islands in a lagoon in the Adriatic Sea. It has no roads, only canals – including the Grand Canal, which snakes through the central part of the city. A ride in a gondola along Venice’s narrow canals is an experience not to be missed.

No list of Europe’s best destinations would be complete without the City of Light – Paris. From its celebrated museums and art galleries to its romantic cafés and iconic fashion houses, Paris is a must-see for any traveler.

Vienna is the capital of Austria and one of the most beautiful cities in Europe. It’s known for its imperial palaces, including Schönbrunn Palace, home to the famous Lipizzaner horses. The city also boasts a wealth of museums and art galleries, as well as a lively music scene.

The Dutch capital of Amsterdam is a charming city built on canals. Its picturesque scenery and lively nightlife make it a popular destination for tourists from all over the world. And with its many museums, art galleries, and historical landmarks, there’s plenty to see and do in Amsterdam.

The capital of Denmark is a lively and cosmopolitan city with a long history. Its charming medieval center is home to fairy-tale sights like the Little Mermaid statue and Tivoli Gardens – one of the oldest amusement parks in the world.

The capital of Germany is a modern metropolis with a turbulent past. Today, Berlin is a thriving cultural center with an exciting nightlife and plenty of historical sights to explore.

Istanbul straddles two continents – Europe and Asia. As a result, it’s a city with a rich history and culture. Its many mosques, palaces, and bazaars make it a fascinating place to visit.

The capital of the Czech Republic is a beautiful city with a fairy-tale quality. Its historic center is filled with Gothic churches, Baroque palaces, and medieval castles. And its cobbled streets are lined with charming cafes and shops.

The capital of Scotland is a lively and historic city with plenty to see and do. From its towering castle to its many museums and art galleries, Edinburgh has something for everyone.