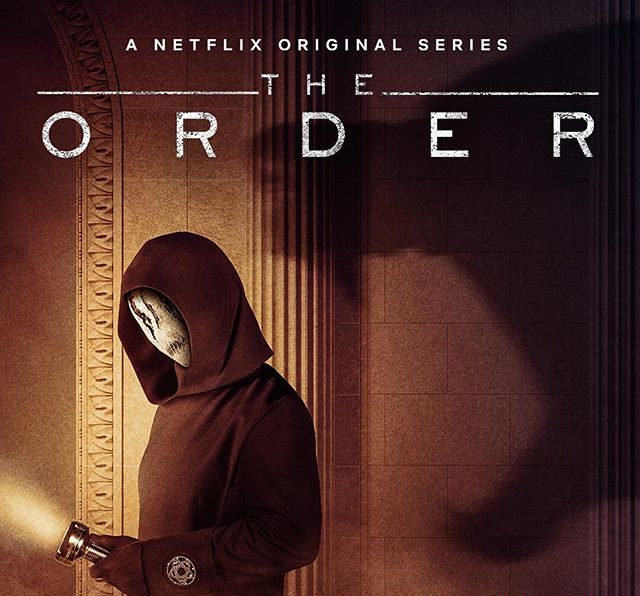 The Order is a Canadian-American horror drama web television series. The series premiered on Netflix on March 7, 2019. In March 2019, it was announced that the series was renewed for a 10-episode second season that was released on June 18, 2020.

Technically the brand-new Netflix show, which premiered March 7 2019, is about Jack Morton (Jake Manley), a college freshman obsessed with joining a the Hermetic Order Of The Blue Rose, a secret society at the fictional, elite Belgrave University. Jack and his grandpa Pete “Pops” Morton (Matt Frewer) clearly believe the Blue Rose is a regular old organization of high-powered skullduggery like the Skull And Bones society at Yale or Dear White People’s Order Of X. The Mortons, a working class family, hope Belgrave’s secret society will open up doors for townie Jack. If you go into The Order knowing its titular order is actually a cadre of magicians. it’s excessively easy to forget Jack has no idea he’s stumbling into many supernatural conspiracies.

All of that changes for Jack by the end of the first episode, “Hell Week, Part One,” when he witnesses a group of Order members playing around with necromancy. And, if Jack has any questions about whether something otherworldly is really afoot at Belgrave, the premiere-closing appearance of a massive werewolf banishes all doubts.

The addition of werewolves is what gives The Order its focus and a way to separate itself from Netflix sibling Sabrina, which already has a group of dubious-at-best witches its lead probably should trust. Here, Belgrave’s other secret order, the Knights Of Saint Christopher, are a group of werewolves sworn to fight dark magic. The Blue Rose’s powered machinations keep setting off the Knight’s wolf-y senses, so it seems these witches aren’t as good as they want Jack and his witch peer mentor-love interest Alyssa (Sarah Grey) to believe.

At the center of all of this black magic drama is Edward Coventry (Max Martini), the grand poobah of the Order and Jack’s unwitting biological father. Because, outside of the immortal battle between werewolves and witches, The Order also features a soap opera-ready familial drama. Prior to the events of the series, Jack’s mother died by suicide. For reasons unveiled over the drama’s 10 episodes, we learn why Jack and his deeply bitter grandpa blame Coventry, who allegedly has no idea he fathered a son, for the tragedy. Part of the Morton’s drive to get Jack into the Order in the first place is to bring Coventry down from the inside.

But because this is still a sexy teen supernatural show : Jack has to take breaks from his magical vengeance plot to scheme his way into better grades, pine for a cute girl, and find his own Stiles Stilinski-ish goofy, lovable, lanky sidekick. Finally, a show Scott McCall (Tyler Posey) and Sabrina Spellman (Kiernan Shipka) can agree on.

The Order has a very exciting theme and you want to deep dive into the world. Magic, secret orders, and evil forces make up a fertile ground for adventure; however, your journey is ruined by petty, one-dimensional characters. You can directly blame poor screenwriting for almost every single encounter. The actors are not being utilized but instead the writers make almost all of the characters a stereotype. You have a female with a punk rock teenage angst who has the emotional range of “slaughter everything” and “I talk with my fists”. You have the seemingly wizened leader who’s actually at the same maturity level as the other characters and his cocktail bartending skills is supposed to make him relatable. There is a pretentious rich-snob who has absolutely no interesting qualities besides choosing every possible choice against the main characters. There is a grandfather who alienates the audience by his singular mindset, then he is supposed to gain your sympathy and motivate the main character’s actions. Even the main character is a dreamy, handsome, self-centered/narcissistic, and too-cool-for-school type who makes choices on his own that no viewer could rationalize. It’s always “I know we made this plan as a group but the moment I walk out of the room I am going to do things my way. I hope all the other characters figure out my plans and try to be good team players in the nick of time.”

There is a token gay man who is treated as the side-kick of the rich-snob character and adds no quality to show. He dawdles behind this pretentious girl as a pet gay without a mind for his own. He makes one decision for himself and it’s to quit The Order. It’s not bravery but more that he outlived his usefulness in the show. As a gay man, I find all of this insulting. All of the cast diversity is in 4 background characters who die or never get their own scene/lines.

The Order should have focused on the mysteriousness of a magical and fantastic world. The plot should have focused on the new students building a friendship, learning magic, the hard lessons that magic has costs, building up a great double-agent/cloak-and-dagger story where the audience is never sure which characters are good or evil. Instead, we got a bunch of misfits running around with half a plan and toasting to their good fortune that a problem was solved. There are tons of loose-ends that should have been hinted about in the last episode to give us closure or get us hooked for the next season.

I was so hyped for a magic school (non-Harry Potter) where the students gained in their rankings and magical skill as they uncovered evil deeds. Yet, I am left with the same petty in-fighting between characters for no apparent reason other than to just be insufferable jerks. There are characters who don’t like other characters just because they are the new person in the room. Why is there always a character whose personality is to be a closed-off b—?! I cannot believe that there are people in this world who are incapable of having an authentic human connection. Why does television insist on making the character wearing armor to protect their feelings and then one time in the 8th episode they happen to smile once with the main character.

Magic. Monsters. And….midterms? At Belgrave University, college freshman Jack Morton joins a fabled secret society where he’s thrust into a dangerous game of life or death. As Jack goes deeper, he uncovers dark family secrets and an underground battle between werewolves and the magical dark arts.