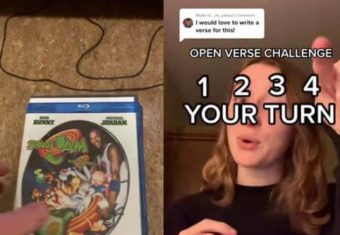 On TikTok, the popular Space Jam DVD fad is spreading like wildfire. Users have started to stitch their own modifications to the viral Space Jam DVD in response to the craze.

Many people are copying the original video on TikTok, and it’s becoming increasingly popular. While some individuals achieve haunting harmonies with the footage, others add amusing elements.

What Is The Space Jam DVD Challenge?

The Space Jam DVD Challenge began with TikTok user and musician Stacey Ryan creating and performing her own verse.

The songwriter held an “Open Verse Challenge” on December 30, 2021. She sang a few lines and then left the rest of the song for her followers to incorporate their own music into the film.

Some users accepted the pre-existing songs, while others took a different approach.

How To Participate In The Trend

You may make your own unusual video or song to go with Stacey’s singing clip, as well as Ashton’s Space Jam DVD, if you want to participate in the Space Jam TikTok craze.

If you are up for it, you may sing or harmonize. Non-singers can also participate by doing unusual things.

You may also make your own singing or lyrics to Stacey’s original video.

Best Videos From The Trend

Nickaproducer, a TikTok user, created the most unexpected adaptations of this style. He used a digital counter to generate a sound that corresponded to the current music.

User Erik Cosinski created an amusing variation by matching the ambiance of the video with his comments. A third user, known as “that bari guy bryan” (Bryan Cowan), used a trumpet to match the style.