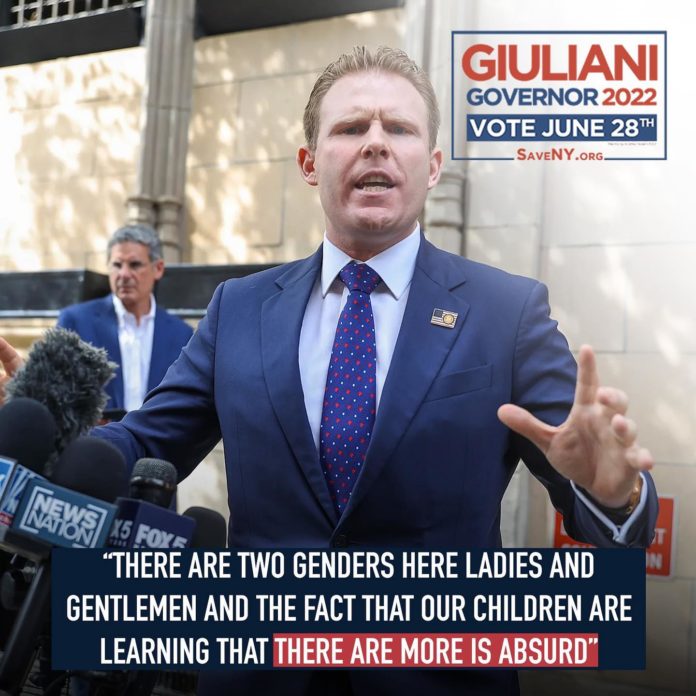 Rudy Giuliani was slapped by an angry worker at ShopRite by a supermarket worker while campaigning for his son in New York. Guiliani was at a ShopRite on Staten Island where he was helping his son, Andrew, who is running as a Republican candidate for governor of New York. Rita Rugova-Johnson, a witness, told the Post she was standing “shoulder-to-shoulder” with Guiliani when an on-duty employee slapped him on the back and said, “Hey, what’s up scumbag?”

According to Rugova-Johnson, the employee was arrested by police. The suspect is a 39-year-old man from Staten Island who will be charged with second-degree assault against a person over 65 years old, according to the Post. Giuliani told the Post that he recovered his composure after being assaulted.

“I feel this tremendous pain in my back, and I’m thinking, what the – I didn’t even know what it was,” he said. “All of a sudden, I hear this guy say, ‘You’re a f-king scumbag,’ then he moves away so nobody can grab him.” Why Is Rudy Giuliani Slapped By Offended Worker?

Giuliani Slapped By Offended Worker: Why?

The incident occurred two days after the US Supreme Court reversed the 1973 Roe v. Wade abortion ruling. Moreover, it is still unknown in the public domain, why the angry worker slapped him. The worker was arrested at the store. His charges and identity were not immediately available. His son, gubernatorial candidate Andrew Giuliani, called his dad “tough as nails.

Daniel Gill, 39, a resident of Staten Island, was arrested and charged with second-degree assault relating to a person 65 years old or older. According to sources, Gill has no prior arrests.

At 3:30 p.m., cops were dispatched to the store, according to sources. The younger Giuliani is a Republican gubernatorial candidate in New York against Long Island Rep. Lee Zeldin, former Westchester County Executive Rob Astorino, and businessman Harry Wilson. “Rudy was assaulted,” his WABC radio partner, Dr. Maria Ryan, told The Post. “He’s a 78-year-old man with a bad back and bad knees.”

Read Also: Why Is #AmberHeardIsAPsycopath Trending?