Who is the husband of Rosie Rivera? Know everything about him 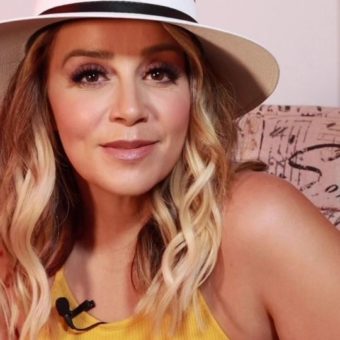 Rosie Rivera is a celebrity and businesswoman from the United States. Rivera served as the president of Jenni Rivera Enterprises before retiring in late 2014. After her sister’s death, she became famous for appearing on Spanish-language reality shows and taking over her sister’s company. Rica, Famosa, Latina is an American reality television series that features Rosie Rivera and her family.

How tall is Rosie Rivera? This gorgeous personality stands 5 feet 4 inches (64 inches) tall and weighs around 56 kg (123 lbs). Likewise, she has a slim body type and her body measurement in vital stats is 34-28-36 inches. Similarly, looking at her physical appearance, she has fair skin with brown pair of eyes and dark brown hair color.

Who is the husband of Rosie Rivera?

Rosie Rivera is married with her husband named, Abel Flores. He is a popular worship leader and singer/song writer.

In 2003 she had daughter Kassandra with ex-boyfriend, Chief. In 2011 she married Abel Flores. They have 2 children together, daughter, Samantha Chay Flores (born 2013) and son, Elias Melek Flores (born October 2015).

Her mother name is Rosa Saavedra and father named, Pedro Rivera. Rivera is the younger sister to Latin singers, Jenni Rivera (deceased), Lupillo Rivera and the aunt of singer Chiquis Rivera. Her other brothers are Pete Rivera, Gustavo Rivera, and Juan Rivera.

Rosie Rivera’s journalism career is her main source of income. Her salary is estimated to be $25,000. She also earns a good amount of money on appearing on TV shows and sponsors.

Rosie Rivera and her family began to appear in the reality television series Rica, Famosa, Latina, in 2014.

In February 2016, Rosie Rivera published her first book My Broken Pieces: Mending the Wounds From Sexual Abuse Through Faith, Family and Love that discusses her tragic, life-changing experience of sexual abuse at a young age, and shares her story on how faith and the love from her family helped her heal and mend those broken pieces.

My Broken Pieces is Rivera’s first book that set her free from the trauma and helped her strength while helping other victims of sexual abuse along the way.

She is a spokesperson and model for young women who like her, were victims of sexual abuse and shares her story to uplift the pain and create strength in anyone who has been affected by sexual abuse.