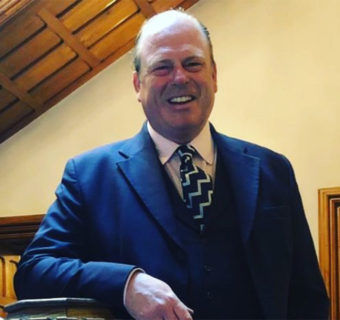 James Braxton is an antiques expert and auctioneer. Earlier on in his career, James set up his own company, The Fine Art Auction Group which ran several auction rooms across various locations up and down the country. However, it seems James no longer runs the business. Since then, James has gone on to different ventures in addition to his TV work. The entrepreneur proudly runs his own wedding venue, Guildhall, Weymouth, and the Lamb Inn, Wartling. He’s clearly got his hands full.

James Braxton is married to his wife Joanna and together they have four children: Amelia, Ned, Annie and Charlie.

Although the Road Trip star generally keeps out of the publically eye, James occasionally posts sweet snaps on his social media of his family, while also proudly showing off his business ventures such as the Lamb Inn’s Christmas party.

James Braxton has been a regular on the series since he joined the Road Trip family in 2016. Although now a familiar face, the BBC show isn’t James’ first time working on TV.

Prior to joining for the show’s twelfth series, James took part in other popular daytime shows such as Celebrity Eggheads, Bargain Hunt and Dealing with Dickinson.