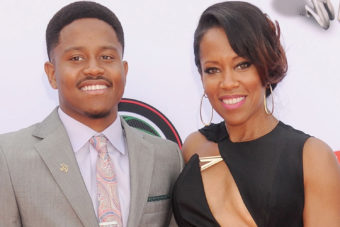 Ian Alexander Jr., the son of actress Regina King, has died. As mother and son bear similar tattoos, as well as some eager to learn more about them. On Saturday (22 January), TV host and mom Regina King announced the death of her son, Ian, in a statement to PEOPLE. The actor said she and her family were “shocked and devastated” by the loss of their beloved.

As the star and her son both have identical tattoos, we examine their meaning as well as Regina King’s other inkings. Let’s have a look.

The father, Ian Alexander Sr, also had the tattoo on his right shoulder. The tattoo was identical for both siblings except that it was a larger design and visible on King’s left forearm. In an interview with Vulture in 2015, King said Ian’s was “from his elbow to his wrist,” explaining he would not allow her to get one the same size.

The inks feature an Aramaic phrase that is translated to mean “unconditional love.” They both got the design tattooed before Ian began his studies at college. King revealed the backstory behind their shared tattoo, stating that she and her son picked it after studying Kabbalah together.

In 2017, while appearing on The View, she said: “He suggested that we each choose three designs and not tell the other which ones they are, with the method being whichever one is matching. We both picked unconditional love.”

How many tattoos does Regina King have?

Regina King has two other tattoos as well, according to the reports. She appears to have a nude woman with butterfly wings on her left foot.

On her left shoulder blade, she is also seen to have a tattoo; nevertheless, because the tattoo faded over time, its form is lost.

The meanings behind the actress’ previous two tattoos have yet to be revealed. However, butterfly tattoos have previously been linked to themes of rebirth.

What’s the meaning of CCFC in Cheer as season 2 premieres on Netflix?