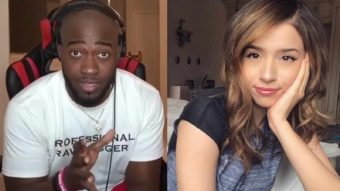 Last night, Pokimane ended a Twitch broadcast because she said that those on JiDion’s stream were “whispering” to those watching hers. Is JiDion banned as a result, and if so, how long will he be off Twitch? When did Pokimane resume streaming after her own 48-hour suspension earlier this month?

What happened between JiDion and Pokimane yesterday?

A separate Twitch user recorded part of Pokimane’s live stream in which she tells her viewers that she’ll “terminate the stream.” “As much as I can manage it,” she explains, “I don’t want people from his (JiDion’s) channel to tell others on my channel what they’re saying. “I’ll put up with the bullsh*t for now, but I don’t want you guys to have to put up with it either. OK?”

She shut off the stream after a few seconds. Pokimane received several messages assuring her it was OK before she ended the broadcast, with many of them using the term “sadge”.

JiDion explained in a stream with fellow streamer Adin Ross that the reason Pokimane‘s stream was ended was because he reminded her of her “previous use of racial epithets.” Meanwhile, Inven Global claimed that what happened was a “hate raid.”

“I like 2 mess with strangers,” reads JiDion’s YouTube description. He tweeted on January 5th requesting others to provide him “funny dares/pranks,” which are defined by HITC as “a joke or prankster.”

The prank on Tuesday, if you can call it that, may have gone too far. According to a screengrab from another Twitter user, Pokimane wrote: “It perplexes me when other streamers don’t protest blatant sexism and misogyny.”

JDion, an Instagram celebrity with almost 100,000 followers, recently stated that Pokimane is the “queen of Twitch” in a video on her YouTube channel. JDion followed up by stating that he would be banned because “Pokimane will get me banned.” He then requests JDion to DM Pokimane with the following message: “It’s bigger than black and white.”

It’s not clear if Ross actually sent the message, but shortly afterwards, JiDion (Demarcus Cousins) tweeted the phrase “It’s bigger than black and white,” with a screenshot of a suspension notice informing him of his Twitch ban. He also updated his profile picture to that of Pokimane.

How long is JiDion banned from Twitch for and when did Pokimane start streaming again?

The Twitch ban for JiDion was 14 days long. He subsequently posted a video in which he screams, “Why? Why?” and “I love you, I love you” at the camera while music plays in the background. He then informs his audience that he’s drunk and that God is the only man he fears.

After a 48-hour Twitch suspension for streaming parts of Avatar: The Last Airbender, Pokimane resumed streaming on January 10th.