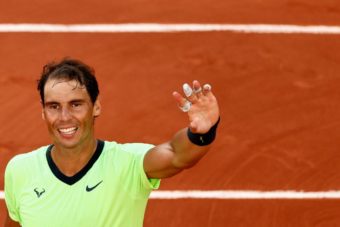 Is Rafael Nadal losing his hair? During a match at the 2022 Australian Open, tennis fans reacted to the star’s apparent loss of hair.

Rafael Nadal is back to doing what he does best, which is playing tennis. The 20-time Grand Slam champion has had a number of ailments in recent years, and it was uncertain if he’d participate in Melbourne this year. However, Nadal has played superbly so far, going four matches deep into the fourth round.

During his fourth round match against Adrian Mannarino, people on social media were concerned if Rafael Nadal has a receding hairline. The tennis legend is known for his long, flowing locks and distinctive sweatband, but in recent years, his hair has significantly less volume.

Nadal’s hair was clearly visible in the Melbourne sunshine, and it does appear as if he is losing his hair. His devotees on social media also noticed it and chimed in.

Men are four times more likely to suffer from androgenetic alopecia (AGA), also known as male pattern baldness, than women. According to one source, half of the men on the planet will suffer from hair loss by the age of 50. By the time they reach 70, around 70% of males will have lost their hair. And before the age of 21, 25% of bald men exhibit early indications of hair loss.

He actually underwent a hair transplant in 2016

Rafael Nadal had a hair transplant in 2016 to restore his thinning hair. According to reports, Nadal underwent a ten-hour Follicular Unit Extraction (FUE) at a clinic in Madrid, which involved extracting hair follicles from unaffected sites of the head to affected areas. The treatment costs approximately £7,700 and involves removing follicles from places that are not affected by balding and transplanting them to other parts of the scalp.

His doctor transplanted 4,500 follicles on his scalp and, despite the fact that it takes approximately 18 months to see the results, his head was considerably fuller after six months.

In 2018, there were reports that Nadal had another hair transplant, which has yet to be confirmed. Rafael Nadal is one of the greatest tennis players of all time, as well as an inspiration to millions. His followers will be hoping he can complete his 21st Grand Slam crown down under and take the lead over Roger Federer and Novak Djokovic.