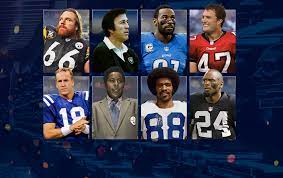 The newest batch of hopefuls for the NFL Hall of Fame was unveiled, but how many individuals are inducted every year? Is there a limit? And when are the new members formally announced as such?

In 2022, the Pro Football Hall of Fame will feature 15 former NFL players in their class.

How many individuals will be inducted into the NFL Hall of Fame? Is there a certain number that must be reached, and when are the most recent football Hall of Famers announced?

How Many Players Are Inducted Into The Hall Of Fame?

Traditionally, the players who are chosen for the Hall of Fame are chosen around the time of the Super Bowl. The Selection Committee meets to determine who will be inducted into the HoF and who will have to wait another year or more.

Normally, the minimum number of players admitted to the Hall of Fame is four, with an upper limit of eight. For example, in 2021, six players were inducted into the NFL Hall of Fame alongside one coach and one contributor.

Peyton Manning was among the six players elevated to HoF status.

When Will It Be Announced Who Is In The 2022 Hall Of Fame?

On that date, ABC will air a special program at 9pm ET with the latest Hall of Famers being inducted and awarded their gold jackets. It’s the day before Super Bowl LVI, which will be held at SoFi Stadium in California and home to the LA Chargers and LA Rams.