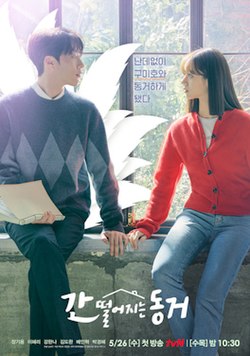 My Roommate Is a Gumiho is a South Korean television drama series that premiered on iQIYI worldwide and TVN in 2021. The tale of love between a 999-year-old nine-tailed fox named Shin Woo-Yeo and a female college student named Lee Dam who inadvertently downs Shin Woo-Yeo’s bead is told. It debuted on iQIYI worldwide and TVN on May 26, 2021, with 22 episodes playing Wednesdays and Thursdays at 22:40 (KST).

My Roommate Is a Gumiho Profile

My Roommate Is a Gumiho Plot Explored

Professor Woo-Yang (Jang Ki-Yong) is a handsome and bright intellectual. He’s also a nine-tailed fox that has browsed the land for 999 years. To become human, he collects human energy in a bead until he is ready to do so. He will soon be transformed into a human being.

Meanwhile, Lee Dam (Hyeri) is a university student. Her drunk friend falls asleep on top of an expensive automobile one day. She apologizes to Shin Woo-Yeo, the car’s owner. While Lee Dam attempts to remove her intoxicated friend from the vehicle, Shin Woo-Yeo offers her assistance. Their destiny is altered in an accident that occurred during their struggle. Lee Dam accidentally swallows Woo-Yeo’s bead when it falls out of his mouth. The bead can only survive in a person’s stomach for one year, after which it will fracture there. Lee Dam will die as a result, and Shin Woo-Yeo will miss his chance to become human. Shin Woo-Yeo explains their situation to Lee Dam and urges them to live together until they figure out how to escape.

Lee Dam, who has never had a boyfriend in her life, now lives with Shin Woo-Yeo.

My Roommate Is a Gumiho Full Cast & Crew Lists