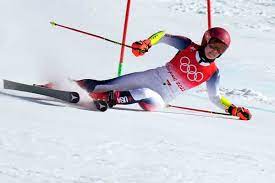 On Monday, American medal favorite Mikaela Shiffrin was disqualified, and we explain the Olympic giant slalom rules as a result. Shiffrin will start her Winter Olympics off on the wrong foot after being disqualified.

Ester Ledecka was preparing to add to her medal count on her third and final run of the giant slalom when she was disqualified for an infraction. She had three Winter Olympics medals, including two golds, when she took off after crossing the finish line.

Since 1936, alpine skiing has been a part of the Winter Olympics and includes 11 medal events. Both males and females participate in a number of styles, such as downhill, super-G, slalom, and giant slalom, which are held at the Alpine Skiing Center in Yanqing, Beijing. The down and super-G are all about speed, whereas the slalom and giant slalom are more technical, as skiers must move side to side through carefully positioned gates.

The giant slalom differs from the slalom in that it has fewer and wider turns. As a result, it is the quicker of the two events, with skiers blasting along at speeds of up to 50 mph.

Each skier will ski two times down the hill. The total time is calculated, and the person who completes it in the shortest amount of time wins.

On Monday, Mikaela Shiffrin’s defense of her 2018 gold medal in the giant slalom ended in a few seconds. The American was disqualified for missing a gate early in the first run of the colossal slalom.

Shiffrin slid and fell on her left hip after five turns around the Ice River, missing the gate she was supposed to go through. She was eliminated from the two-leg event on the first run because of it.

After Mikaela Shiffrin’s disqualification, many fans were curious about the Olympic giant slalom regulations. Simply stated, if a skier misses a single gate, he or she is immediately disqualified from the event.

There is a method to avoid the DQ, but it would entail skiers returning up the hill and passing through the missed gate correctly. However, because doing so would take much longer than the rest of the field, this isn’t always worthwhile.

Shiffrin added that she has dedicated half of her training to the event, which is true. “I won’t hide my disappointment, but I’m not going to dwell on it either,” she stated in response to questions from journalists after the race.

But there was only one turn; I had a tiny little mistake when I really pushed on my edges, and that makes all the difference.

“It doesn’t happen too often that I am falling,” she added. “I have been really working on the right timing of my turns and really never thought this was going to be part of the issue. But it wasn’t because I was holding back, so I can be proud of that. But it’s five turns into the Olympic GS, there’s disappointment for sure.”