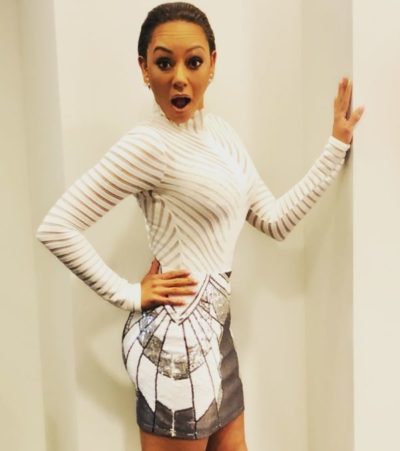 Mel B real name is Melanie Janine Brown who is an American English pop singer songwriter, rapper, television personality, actress, and author. She rose to prominence for the band ‘Spice Girls’ under the stage name Scary Spice. She pursued a solo career before the Spice Girls Reunion. Her song “I Want You Back” charted at #1. In 2013, she became a judge on America’s Got Talent as well. Tune in biography!

How old is Mel B? At present, she is 45-years old. She was born in Leeds, West Yorkshire, England. How tall is Mel B? She stands on a height of 5 feet 6 inches tall. She weighs around 57 Kg or 125 lbs. Her body measurements are 34-25-36 inches. She wears a bra cup size of 33 D. She is a fitness as well. She is obsessed with clean eating, easy fitness routines.

Who is Mel B currently dating? Mel B married twice in her life. She was married to Jimmy Gulzar from 1998 to 2000. She married her second husband Stephen Belafonte on June 6, 2007. She and Stephen separated in 2016. She is also blessed with three daughters named Angel, Madison and Phoenix. She also had affairs with several guys in her past. Likewise, at present, Scary Spice Mel B has finally confirmed she is dating hairdresser Rory McPhee. Moreover, the age gap between is of 13 years. The 45-year-old singer has been dating the handsome 32-year-old Rory. As per her previous dating history:

First Marriage: she was married twice. From 1998 to 2000, she was married with Dutch dancer Jimmy Gulzar. Brown changed her stage name to Melanie G while they were married. Their daughter, Phoenix Chi Gulzar, was born on 19 February 1999. In 2000, Brown filed for divorce, and the divorce was finalised later that year. Brown won custody, and paid an alimony settlement of $2.8m to Gulzar.

Soon after the divorce with her first husband, in 2000, she get into a relationship with actor Max Beesley. After two years of long dating, the couple get separated. After this, Brown was get into in a relationship with film producer Christine Crokos. From 2002 to 2006, she dated Christine. In addition, she had a four-year relationship with a woman when she was in her teens. In 2019, Brown confirmed rumors that she and Geri Halliwell had sex during the height of the Spice Girls’ fame. She was also in a relationship with actor Eddie Murphy. The former couple is also blessed with a baby daughter. Brown’s second child, Angel Iris Murphy Brown, born 3 April 2007. By early December 2006, Brown and Murphy had separated. Brown had reached a paternity settlement of $7 million from her Ex-husband Murphy.

Second Marriage: After this, she began dating Stephen Belafonte. The couple secretly married on 6 June 2007 in Las Vegas, Nevada. From this marriage, Brown gave birth to her third daughter, Madison Brown Belafonte, in Sep 2011. In March 2017, Brown filed for divorce from Belafonte. The divorce was finalised on 15 December 2017.

Her full name is Melanie Janine Brown who was born in Hyde Park, Leeds. She is grew up in the Kirkstall area of the city. She born to her parents named, Andrea and Martin Brown. She belongs to mixed ethnicity. Her father is from the Caribbean island and her mother is British. As of education, Brown studied performing arts at Intake High School in Leeds before entering the entertainment industry.

Mel B Net Worth

Talking about her career, in the 1990s as a member of the girl group ‘Spice Girls’, with over 85 million records sold worldwide, the group became the best-selling female group of all time. In 2000, she released her debut solo album Hot. Furthermore, other singles from the album such as “Tell Me” and “Feels So Good” both charted within the top 5 in the UK. She has established herself as a television personality and talent show judge, in 2007. Apart from all this, between 2011 and 2016, Mel B served as a guest and main judge on the Australian and British versions of ‘The X Factor’. Simply, she is a lady with class and beauty with brain.