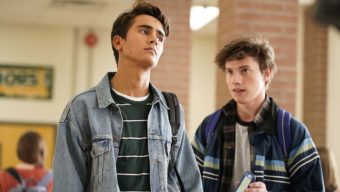 Following the release of American teen comedy-drama ‘Love, Victor Season 2’ on Hulu and Disney+ in June, the series was renewed for a third season. The narrative will continue Victor Salazar’s (Michael Cimino) self-discovery, as well as domestic and sexual orientation difficulties. The program is based on the 2018 film “Love, Simon” written by Isaac Aptaker and Elizabeth Berger, the same team that created the television series. Victor.

There are currently no indications about the plot for Love, Victor Season 3 from the creators; nevertheless, Michael Cimino (portrayed by Victor Salazar) the show’s main character recently tweeted some of Season 2’s most memorable moments. Hulu has confirmed that Love, Victor Season 3 will resume with an Instagram post from the actor. The message reads “I WONDER WE’LL FIND OUT WHO’S AT THE OTHER

What could be the plot for Love, Victor Season 3?

Creekwood High School, Victor’s struggle with his sexual orientation and his quest to discover himself: facing difficulties at home and struggling with his sexual identity is the subject of this series. When it appears too difficult for him to manage through high school, he reaches out to Simon.

The conclusion of Season 3 will answer all of the unanswered questions from the end of Season 2. Victor faced a difficult decision at the end of the second season, between his two lovers. In fact, he dashed to the individual with whom he wants to be in a relationship.

However, Victor’s audience was unaware of the address he had visited. It appears that “Love, Victor Season 3” will resolve the previous season’s unresolved conclusion.

Fans have already started speculating about who Victor’s choice could be, despite the fact that no plot details are available. Despite having a number of complicated challenges, will Victor stick with his partner Benji (George Sear) or form a new relationship with Rahim (Anthony Keyvan)?

Meanwhile, show-runner Elizabeth Berger told Entertainment Weekly that “it’s a really intriguing, relatable decision where you’re at a crossroads in your relationship and you have all of this wonderful history with one person, but things have gotten tough.”

What could be the release date for expect Love, Victor Season 3?

Filming for ‘Love, Victor Season 2’ began in November 2020. As a result, shooting for Season 3 is anticipated to begin in November 2021, but the production may be delayed as the Covid-19 epidemic rages on in America.

Who are the cast for Victor Season 3?

Rachel Hilson, Anthony Turpel, and Bebe Wood would all be expected to reprise their roles as Mia Brooks, Felix Westen, and Lake Meriwether. There will definitely be some fresh faces added to the mix, but the identities have not been established yet.

There is no word on a release date or filming updates as of yet. We’ll keep you up to speed on any developments relating to the series. Keep an eye on Devdiscourse for the most recent information regarding television series.