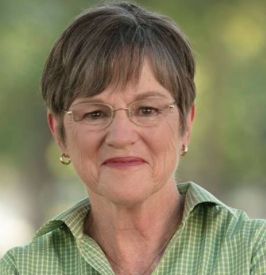 Laura Kelly (born January 24, 1950) is an American politician serving as the 48th governor of Kansas since 2019. She is member of the Democratic Party and represented the 18th district in the Kansas Senate from 2005 to 2019. Kelly ran for governor in the 2018 election and defeated the Republican nominee, Kris Kobach.