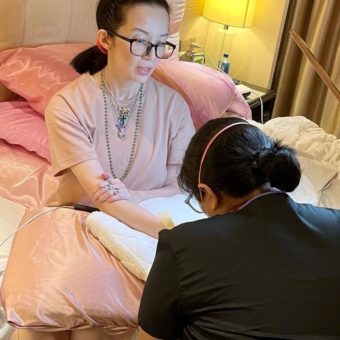 Kris Aquino, a Filipino TV host, has caused concern among her followers after posting a photo of herself in bed with an IV drip next to her. Let’s have a look at Kris’ medical history and present condition. She is a well-known figure in the Philippines, particularly after her appearances in Feng Shui and Sukob. She has gone on to be a businesswoman and philanthropist while remaining an actress.

It’s not unusual for many of her followers to be concerned about her declining health, which she revealed in 2021 at the age of 50.

The news comes just nine days after Aquino revealed that her health was far from good, but she was doing all she could to recover for the sake of her children Josh and Bimby.

She claims that although she has huge veins, they are weak and it takes eight tries to insert an IV line.

Unfortunately, the sickness has had an impact on her personal life, as she is said to have sparked the break up with fiancé Mel Senen Sarmiento. The pair became engaged in October 2021, but they were under pressure to live “in a bubble” to protect Aquino’s delicate health owing to the pandemic.

On January 3, the entrepreneur posted screen captures of her ex-fiancé’s messages, which read: “I accepted your offer of letting me go with a heavy heart. I will always treasure the pleasant times we had together. You will be in my heart for eternity.”

What is Aquino suffering from?

Despite her brief reference to an autoimmune disease, the Grammy-award winner is afflicted with a number of illnesses. She clarified in January 2019 that she has two autoimmune diseases: systemic lupus erythematosus and thyroiditis. Her thyroiditis has resulted in a noticeable lump in her neck and an eye protrusion on the right side of her face, according to Aquino.

She also has chronic spontaneous urticaria (CSU), which causes red itchy hives to appear on her skin. People who have CSU are more prone to autoimmune diseases, according to Healthline.

In October 2018, Aquino revealed she would be taking “high-dose antihistamines” and using EpiPens for the rest of her life as a result of her diagnosis. Furthermore, Aquino has anaphylaxis – a severe, potentially fatal allergic reaction – as well as high blood pressure.

Following her update, fans have been sending warm wishes to the actress:

Follow Kris on Instagram to stay up to date on her health journey. We wish Kris the best of luck in her struggle for health and wellness.