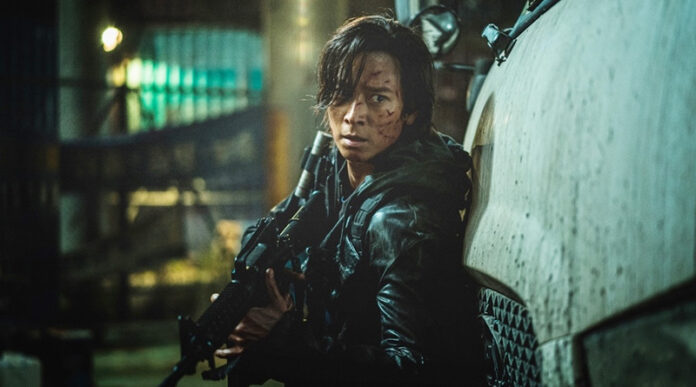 There is no doubt that Jung_E, the acclaimed 2023 South Korean sci-fi epic written and directed by Yeon Sang-ho starring Kang Soo-yeon, Kim Hyun-joo, and Ryu Kyung-soo, is a must see. Upon its release on January 20th of that same year, the film served as a fitting swan song for the legendary actor Kang Soo-Yeong who passed away before it was released on January 20th of that same year. Currently, it is available only on Netflix.

Jung_E Plot At A Glace

As the title implies, Jung_E portrays a desolated Earth in the 22nd century. There has been a civil war between the Allied Force and the Ardian Republic since the humans settled down in around 80 of those shelters. The shelters 8, 12 and 13 declared themselves the Ardian Republic, attacked earth and its shelters and began attacking the Allied Force.

According to Kronoid researchers, Jung-yi’s brain data has been copied, and AI JUNG_E is operated in accordance with that data. By simulating Jung-yi’s final mission, researchers are attempting to gather combat memory data in order to develop an exceptional combat AI that can be used to fight. A lot like Captain Jung_E, AI Jung_E fails to succeed in every simulation of the last mission, making the project nonprogressive, just like Captain Jung-yi failed on her last mission.

During the same period, Seo-hyun learns that the cancer she was suffering from in childhood has returned. She has only 3 months left to live because the cancer has spread again. In addition, she learns from the chairman of Kronoid that combat artificial intelligence does not need to be developed anymore since Adrian Rebuild and Allied Forces are entering a treaty with each other and Kronoid has decided to focus on the development of household services with artificial intelligence.

During the last simulation of project JUNG_E, Seo-hyun escapes the facility with the help of AI JUNG_E while other combat AIs and forces begin chasing them down. Seo-hyun, who gets shot in the chase, urges AI JUNG_E to leave her and survive. After escaping, Jung_E looks around a mountain range from the top of a rock. That is the end of the film.

In the end, Seo-Hyun has become deeply moved by the love and devotion that her mother has shown her. As a result, she decides to aid in the liberation of one model from its testing phase, giving JUNG_E AI one more chance at survival. It is Seo-Hyun’s intention to erase all memories of her daughter from JUNG_E’s software before running the concluding simulation. In contrast, Sang-Hoon attempts to penetrate an unexplored zone within Jung-Yi’s mind with aspirations of eventually succeeding in his research project for good this time around.

It is tragic that Jung-yi ended up in a coma on the day that Seo-hyun undergoes her surgery. As a result, her family was coerced into agreeing to replicate the brain of Jung-yi by Kronoid, the agency that is responsible for creating artificial intelligence. They promise to cover all treatment costs as well as Jung-yi’s daughter’s education and living expenses if they do so.