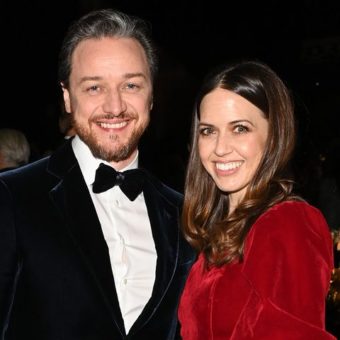 James McAvoy is married! In an interview with The Guardian, the 42-year-old actor confirms that he and Lisa Liberati married recently.

The relationship between Matt McAvoy and Daniel Liberati began in 2016, when he split from his ex-wife Anne-Marie Duff, with whom he has an 11-year-old son, Brendan.

The pair first met on the set of M. Night Shyamalan’s 2016 film, Split, in which McAvoy starred and Liberati served as the director’s assistant. They began seeing each other a few years after that, according to the source.

With his new wife, McAvoy finds himself residing between three cities: his native Glasgow, Scotland, and his current home in London, England.

On the professional front, he is presently playing Cyrano de Bergerac on stage. The show is currently running in London and will be staged in Glasgow and Brooklyn, New York, later this year. Despite the continuing danger posed by the COVID-19 epidemic, and despite the fact that McAvoy recently contracted Omicron variant, he feels it is critical to return to work.

“Every time you step outside you are taking a risk. But how long can we maintain a society that doesn’t move, that doesn’t connect? If you feel comfortable coming, we’ll see you. If you were a regular theatregoer and you’re not coming, we’ll see you in a couple of years,” he says. “But if we wait to put on shows until this whole thing is truly over — if that’s ever going to happen — then things like theatre and music might not exist.”

Who Is Angela Simmons Boyfriend?

McAvoy was previously married to Anne-Marie Duff from 2006 to 2016, and the couple share son Brendan, 11. McAvoy and Duff, 51, met while working on the British television show Shameless, on which Duff played McAvoy’s character’s love interest.

In conversation with Mr Porter in 2017, the famously private actor acknowledged that while his life changed “massively” after the divorce, he intended to keep his personal life private.

“One of the things that’s stayed the same is that I still don’t talk about my personal life, really,” McAvoy said at the time.

Liberati was last seen on McAvoy’s Instagram in 2019, when he posted a photo of them in colorful wigs with matching hoodies on Halloween.

“Happiest of Halloweens!hope yours was as Fantatastic as ours,” he wrote, tagging the soda brand Fanta.