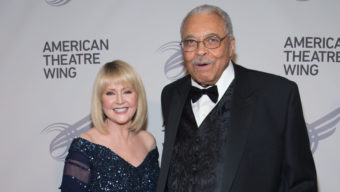 Cecilia Hart grew up in Wyoming and moved to New York City to fulfill her dream of becoming an actress. She became well known on the Broadway scene for her role in Dirty Linen and New-Found-Land.

She won the 1977 Theatre World Award and the Drama Desk Award that same year. Prior to marrying James, Hart was wed to actor Bruce Weitz from 1971 to 1980. Who was James Earl Jones’ second wife Cecilia Hart?

Over the years, she has been in shows like Law & Order, Charles in Charge, and Pros and Cons. Before her death in 2016, Hart attended the Tony Awards with her spouse. In 2017, James paid homage to his wife at the ceremony before accepting the Tony Lifetime Achievement Award.

“I want to thank my wife Ceci for being such a wonderful companion in my life and in my work,” The Sandlot actor said. “And, for being the great coproducer of our son Flynn and for being so dazzling on the red carpet.”

Does James Earl Jones have grandchildren?

While it’s unclear whether the veteran actor has any grandchildren, he has been very vocal about his own grandparents. After his parents separated, Jones was raised by his maternal grandparents in Michigan.

James Earl Jones is a well-known actor who has a net worth of $40 million. Despite James’ long and illustrious career as a stage, film, and voice actor, he is best known today for providing his voice to the character of Darth Vader in the original Star Wars trilogy.

Throughout his career, Jones has won numerous honors, including three Tony Awards, a Grammy Award, and an Emmy Award. Jones has continued to be active in the entertainment industry throughout the years and remains a prominent figure today.

Who is 50 Cent’s new wife Jamira ‘Cuban Link’ Haines and how old is she?